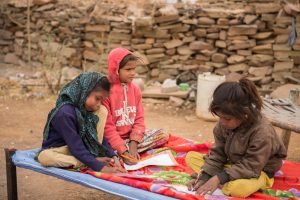 As our vehicle comes to a halt, a young girl came running to greet with a broad smile. This is Krishna, our sponsored child. Her face is not hidden under a scarf, as it was with her most times. Her mother lays out a charpai outside the one room family house.

“I’m hearing her talk for the first time after all these years,” says Jeyakumar, a World Vision India staff at Bundi.

Krishna’s mother is a housewife and her stepfather works as a daily wager at stone quarries around the village, chiselling and loading stones on trucks. Krishna lives with her parents and an elder sister Seema, aged 14, in a village, around 45 km from Bundi. 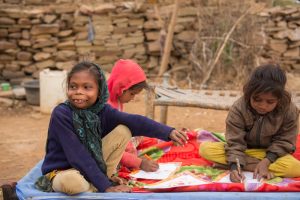 Seven years ago, when Krishna was 3, she had accompanied with her stepfather to work. At play, she fell and hit her jaw on the ground. Krishna’s mother noticed a small swelling on the mandible but didn’t take it seriously as she had not complained of pain then. But over the years the swelling grew, steadily.

Krishna was diagnosed with Cherubism (aggressive) Mandible, a disorder marked by abnormal bone tissue in the lower jaw. The bone is replaced with painless cyst-like growths. Her mandible swelled and she had large expansible lesion. Her tongue withdrew inside her throat. Her nose was blocked and she had problem breathing. It was painful for her mother to see her turning and twisting in bed, mouth open, struggling to breathe. She couldn’t chew or drink water. And her bleeding nose often kept her awake even at night.

The structure of her face changed and it was unpleasant to look upon. As her face swelled, her confidence wilted. She became a recluse, her voice withdrawn. She began hiding behind scarfs. Her house became her prison, deprived of a normal childhood such as play and education. 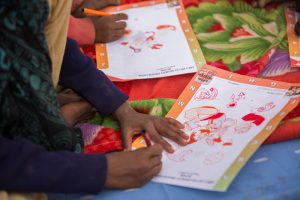 At the charpai, Krishna paints cartoon characters. She has always loved painting. That was one thing she could do at home. Her two friends come over and sit with her at the charpai.

The school she once loved began to haunt her after the illness. Her schoolmates made fun of her looks. There were parents who thought the tumour was contagious and didn’t want it transmitted on their children. They lodged formal complaint against Krishna attending school. The school asked her parents to take her off from school until she was healed. She had to quit school, just a couple of weeks into it.

“Parents wouldn’t let their children play with Krishna. Sometimes her schoolmates threw stones at her,” said Krishna’s mother. “I made her quit school for her own good. Since then I had to be at home to look after her. I couldn’t let her be alone by herself even for a while.”

The family faced rejections just because of Krishna’s looks. “My friends and some villagers told me not to bring my sister along when I go out to shop or fetch. It hurts. They didn’t want to look at her,” said Seema, her soft spoken sister.

In the last few months before the surgery, the cyst-like growth had become enormous. “The doctor recommended us to go for surgery or risk losing her,” said Deepak, a World Vision India staff, who had been with Krishna’s family during all her treatments. For the initial couple of years she was treated at Kota but in 2015 they made the first trip to Delhi. “The doctors told me plainly that Krishna required surgery to live on,” said Deepak.

It was clear then that surgery was not an option, but a necessity. World Vision India assisted her with the surgery expenses, that amounted to around 4 lakh rupees.

“We don’t even have enough money for rotis. How could we afford for the treatment? World Vision India took her for the first check-up and ever since have taken care of the expenses,” said Krishna’s stepfather Ramlal. 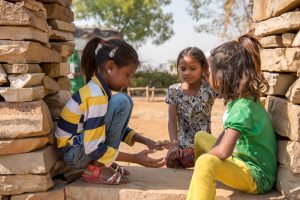 Krishna can now do whatever she wants. She sits on her lap when she is not playing with her friends. They have formed a special bond over the years. It was them against the world. Krishna whispers into her mother’s ear. Her mother smiles and says, “She has been telling me that she wants to attend school.” Krishna has kept all her dreams alive.

Krishna’s mother can’t thank enough for saving her daughter’s life. “We looked for help everywhere. We asked a lot of people to lend us money for the surgery. But none were willing to help. She would have died if it was not for the help,” she said, folding her hands together in front of her face, in gratitude.

Seema, was the only one in the family who stayed home while the rest of the family left for Delhi. She couldn’t believe her eyes when she saw her sister after a week. “She looks good now.”

The house was silent once. There was no voice of children, no visitors. It has now come alive with Krishna’s return. She accompanies her mother to the village well, goes to the bazaar with her sister, plays anywhere and everywhere with her friends. This is her second chance to life.

14 thoughts on “Krishna gets a second chance”