Thumpa didi grabs my arm and herds me down an alley and through a crowd of men. I am wary, but certainly curious. The air is heavy with the smell of alcohol fused with incense, sweat and sewage. The lanes are lined with girls and women of all ages – some seem suspiciously young. ‘Be close to me’, didi says as she pushes away a staggering man and ushers me past him.

I am in Kolkata. In one of Asia’s largest Red Light Districts. 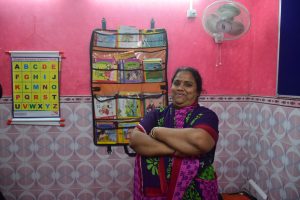 Thumpa Didi is a volunteer with World Vision India. A passionate woman. Unapologetically loud, generous, a very positive presence to be around with boundless energy. Once, at the end of a long day with the children, I find Thumpa didi sitting down with her feet up, and ask her ‘didi are you tired?’ She looks at me with a twinkle in her eye ‘Fat people are never tired. We have the most energy!’

Didi later shares with us her story. She moved to Sonagachi to work for an NGO as a young girl. And during those years, her heart went out to the children of the sex workers, and she wanted to do something to ensure that they never had to go back into the sex trade like their mothers. So she decided she would remain in Sonagchi.

One morning in the red light area, in mid-conversation, didi suddenly she lets out a bellowing ‘Deepa… DEEPA!’ (name changed). A young woman who was a sex worker, perched on a doorstep a few meters away, looks up from her phone, spots Thumpa didi and hurries over to answer didi’s questions about whether her child had enrolled in a school yet. Didi makes it her business to sniff out any child who isn’t going to school, and ensures that the child resumes classes.

What strikes me during my visit to Sonagachi is a stark paradox – it is an unusual life I am witnessing around me that comes alive at dusk. Women dressed in colourful, glittery clothing, faces painted with makeup and vying for the attention of the passers-by. Some getting more attention than the others. Some visibly shivering in their minimal clothing, because the chill of the winter has not quite left Kolkata. But ironically, what also strikes me is the normalcy of life in the day – little children running around their mothers tugging their salwars or playing games, some women carrying their babies and feeding them, some washing dishes, some drying freshly washed clothes and some buying knick-knacks from hawkers. It is a whole eco-system. It is their lives. 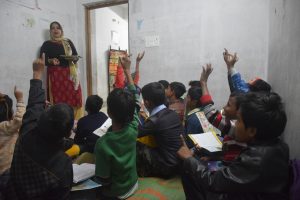 On our first evening there, Thumpa didi leads us into the heart of Sonagachi, to one of World Vision India’s Child Friendly Centres- a small room crowded with about 25 teenagers who are children of sex workers living in the area. She introduces us to them as a team that was going to conduct an Art workshop for them the next day. They are shy at first, but in no time, their curiosity gets the better of them, and the questions begin, ‘Do you have brothers or sisters?’ ‘Where are you from?’, ‘Can you sing us a song? An Anne-Marie song?’ and so on. Every now and then, between questions, they steal glances at Thumpa didi. She was clearly in charge. And the children’s healthy fear mingled with affection for her is obvious. 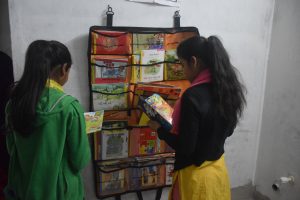 The teenagers we met tell us how much they love World Vision India’s Child-friendly Centre, how they are getting help with their studies, learning the A, B, C’s of staying safe from sexual abuse, and learning good values. They tell us that before the centre existed, they would wander around neighbouring areas in the evenings to pass time while their mothers solicited clients. Joseph Welsey, the Head of the Anti-Child Trafficking Programme for World Vision India, who was with us, elaborates ‘Adolescent and teenage girls are especially vulnerable because, in some cases clients don’t differentiate a sex worker from her child, and the children are sometimes abused.’

Thumpa didi’s heart for these children makes her go beyond the call of duty. She makes herself available to the children so they can call her at any part of the night or day if they are in trouble. Recently, one of the girls was being forced out into the street at night by her raging brother. She called Thumpa didi, who kept her in her home for the next few days till things calmed down. 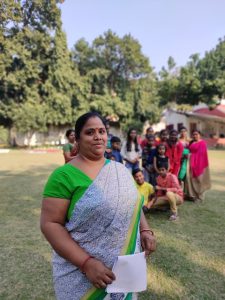 ‘Do you face threats in situations such as these?’ I am curious. ‘Of course’, she says, ‘but I tell them, everything we do is for your children to have better lives. And they have nothing to say in response!’ ‘When I was young, I was like you. I was terrified of this place. I would stay indoors for the most part, but now I am brave.’ Didi looks dead serious, ‘when someone is in trouble and announces that they are going to Thumpa didi’s house, they are left alone because they don’t want to mess with me.’

The visit, for me, is a reminder that the well-being of children hinges on the work of people like Thumpa didi. What she can’t do in Sonagachi, is take those children out of their context. But what she can do and does, is keep the doors of World Vision India open to them all day and night, to use the child friendly centre to give them a safe space and find friendships in each other and to help them envision a way out of there.

And most importantly, to make sure that all children feel safer.

Because Thumpa didi is around. Because World Vision India is around.