Sanitation is one the biggest concerns of our country at present. The World Health Organisation estimates that 1,17,000 Indian children under the age of five died in 2015 from diarrhoeal diseases caused by unimproved sanitation and hygiene.

Women and girls face shame, loss of dignity and safety risk with no toilets at their homes, communities and schools. Dasra’s report “Spot On” indicates that 66% of the girls in India manage their period outside or in an open field due to the absence of a household toilet, while 23% of girls drop out of school for the same reason. 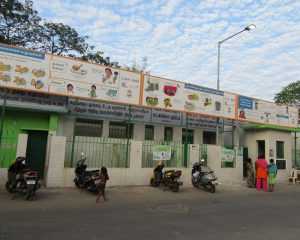 In the light of these issues and the Flagship, Clean India campaign of Prime Minister, Sri Narendra Modi, World Vision India works on making the communities it serves, open defecation free.

We’d like to share with you one such initiative that was undertaken in a community we serve in Neducheziannagar,  Chintadripet, Chennai. Children and families living here were in dire need of proper toilets. The community toilet was unsuitable for use with no water facilities, broken drainage pipes, etc.

After we identified this community’s need for a toilet, we also discovered the reason behind their practice of open defecation. Despite the availability of community toilets in neighbouring areas, the people of Neducheziannagar had limited access to it due to the same being perpetually occupied and seldom vacant for use.

Through technical expertise such as calculating the time taken to wait in queues to use the toilets, we concluded that renovating the neglected community toilet in Neducheziannagar will mitigate the issue of open defecation for them. 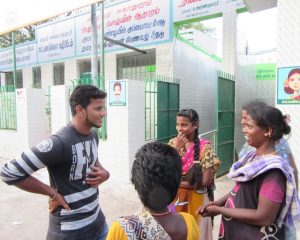 To ensure children and families use the toilets and for its maintenance, a committee called the ‘Friend’s Group’ has been formed. This committee has also been provided with the required guidance and counsel for the upkeep of the toilets.

It is nice to see how this group takes ownership of the community toilet. The salary for the staff who clean the toilets, cleaning equipment and other resources are paid/purchased through the voluntary donations collected from people who use the toilet. The donations are deposited in the bank account of the Friend’s Group. The group has office bearers such as president, secretary and a treasurer who ensure the smooth functioning and decision making in the group. Arunkumar, president of the Friends Group, is proud to take up the responsibility of keeping his surroundings clean.

We would also like to thank the Friends Group and Chennai Corporation for the smooth implementation, functioning and success of this project.