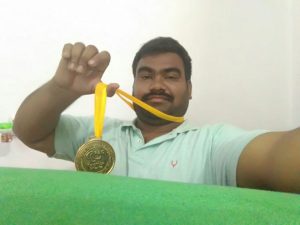 Syed, a formerly sponsored child of World Vision India, is now making the country proud of his achievements in sports.

Syed, from Madurai, Tamil Nadu, was affected by Polio at the age of three. He joined the Clara Olive Polio Home run by World Vision India in the year 1998, where he studied until 2005.

After that, Syed was enrolled in another school near his house but he still continued to receive support from World Vision India.

During his higher secondary year in school, he started participating in various athletic events and won prizes too. Syed pursued his love for sports even in college. Observing his performance, the local Handicap Welfare Association encouraged Syed to take part in more competitions, where he made remarkable achievements in Javelin, Shot 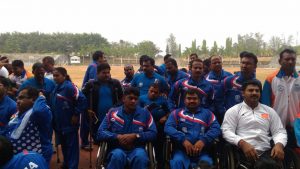 Since then, there has been no looking back for Syed; he is successfully continuing his winning spree. Early this year, the Sports Authority of India sent him to Sri Lanka to participate in SWAARC (South West Asian Association of Regional Countries) International Para Athletics Champions in the Discus throw and Shot Put where he won two gold medals.

Through his accomplishments, Syed has made all of us proud.  “From the beginning, World Vision India’s support helped with my achievements. I look forward to participating in the Asian Para Games 2018, Jakarta and the Tokyo Olympic Games in 2020”, says Syed.

Along with our sponsors, we wish Syed the very best in all his future endeavours. Take a look at the awards he has won so far –

8 thoughts on “Syed’s many achievements”