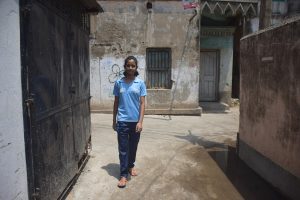 When Pomi is around people don’t dare to go against the law.

No, Pomi is not a policewoman. She is just a simple yet fearless young lady passionately fighting the rights of children. 18-year-old Pomi is from a community we serve in Bardhaman, West Bengal.

The community she lives in is regarded as dangerous even by the local police.

Pomi received the Birangana (Bravery Award) in 2018 by the West Bengal Commission for Protection of Child Rights (Government of West Bengal) to acknowledge her special efforts in the community.

From stopping child marriages, to campaigning against anti-social activities such as the selling and consuming drugs and alcohol in the community, to clean-up drives, ending open defecation and also enrolling children in school, Pomi and her friends from six other children’s clubs have come together to fight and end injustices in their community.

Their main focus is ending child marriages which is highly prevalent here. 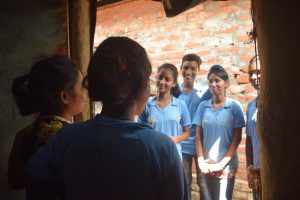 “Earlier, children would start getting married by the age of 14 itself, but now this has stopped because of the presence of our groups. We prevented two cases of child marriage so far and many have heard about us and stopped on their own”, says Pomi.
She and the members of the children’s clubs have also enrolled around 15 children in school and conducted a two-week long anti-drugs campaign.

In recognition of their efforts, on the 21st of February 2018, six children’s clubs were felicitated with certificates of appreciation as well as a cheque for Rs. 10,000 by the Superintendent of police Bardhaman and the Bardhaman Municipality amidst several dignitaries and leaders. The children planned on using the money to develop a library for children in the community.

The Superintendent of police during his speech at the ceremony, said that even though the Police had conducted many raids, they were unable to stop illegal activities. But to his surprise, the children clubs and Community Based Organisations have been able to do it.

The first children’s club was formed by World Vision India in 2015 and had a small group of children. Later this group was divided to form six other groups and currently there are eight groups in the community that have a membership of almost 300 children.

While working on cases the children always consult the child well-being committee members, police and other leaders in the community.

Pomi is currently doing her B.A 1st year and is a keen advocate for girl’s education. She was thrilled to receive the Birangana award. This award has given her an increased boost to do much more for her community. She now wants to pursue a degree in social work along with a technical course in designing. 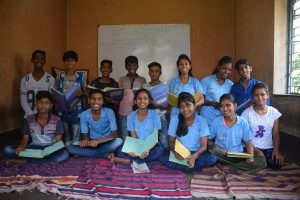 With a strong vision for every child, Pomi and her group are an inspiration for others in their community. “We want poor families in our community to be helped. We don’t want a single child to drop-out of school, to be employed as a child labourer or to get married before the right age. Our vision is for every child in our community to be aware of their rights and become a member of the children’s club so that they have the opportunity to learn and grow,” says Pomi.

93 children’s clubs have been formed in the communities we serve in Bardhaman, West Bengal.

4 thoughts on “Pomi – The Epitome of Courage”