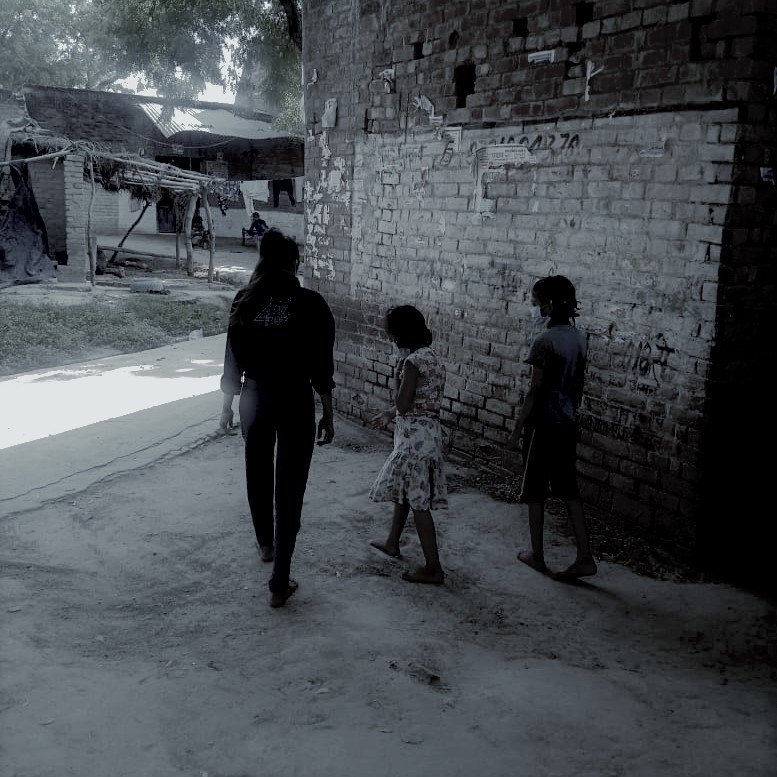 There is a numbing silence inside their little hut in North India’s Uttar Pradesh, as 15-year-old Preeti* does her best to hold back tears recollecting memories of her parents being around and looking after them. She’s mixing a bowl of rice with whatever is left at home for her two little sisters, Tanya* (11) and Anya* (8). The three sisters are each other’s support at home, while their youngest brother, six-month-old Yash*, stays with their aunt in another village.

It was only four months ago, that Preeti and her sisters watched their mother, Rani*, gasp for breath. They watched tears roll down her cheek as she laid unwell on the bed with an oxygen mask connected to an oxygen cylinder at home. That morning, she breathed her last breath.

“My sisters and I sat there crying. We didn’t know what to do. I felt a huge weight on me as soon as she left us,” says Preeti, who wishes her mother said something to her in those last moments.

After Yash had a preterm birth, Rani’s health deteriorated. She was treated in a district hospital for a month after her delivery. Sadly, she lost her battle to life days after she returned home from the hospital.

Preeti cooked, washed clothes and took care of her siblings single-handedly after her mother passed away. Her father, Ravi*, would go to work and return home late in the evening. And ever since he lost his wife, he was remorseful, blaming himself for not being able to save her life. He stopped talking to people around. Preeti says, “It was as if he was only living to look after us, his children.”

Just when Preeti was beginning to cope with the sorrow of losing her mother, her world came crashing down again – causing pain and grief that may take years or even a lifetime to live with. Ravi, Preeti’s father began having a cough and fever for four days and he thought it was a normal flu. On the fifth day, he began feeling breathless and passed away without saying a final goodbye to his now orphaned children.

When her father didn’t open his eyes, Preeti immediately ran to her uncle’s house asking them to come help. Her uncle came running and realised Ravi was no more. Preeti kept persuading him to help her father, not knowing what had happened. When their uncle told them that their father also passed away, the children wept for hours together.

“At that moment I felt like now if my mother and father are not there, who will look after us? When they were there, they wanted to educate us, now who will educate us?” says Preeti, adding “I don’t know what will happen.”

Preeti dreams of becoming a doctor and she says, “This was my father’s dream, he wanted me to be doctor. He used to say this to me over and over again.”

Rani was 36-years-old and Ravi was 40-years-old, they were young and only beginning to build their family and help give their children bright futures. Anya says, “I want to be a police officer and my mother always supported me and said she will make me one.”

Now fear grips Preeti, as all she can see ahead of her and her siblings is an uncertain future. Although her uncle and aunt are around them whenever they need help, Preeti says they have three daughters of their own.

According to Indian government data between 1 April and 25 May, as many as 577 children were orphaned in the wake of the second wave of coronavirus. Besides sorrow, grief and anxiety, children orphaned are at greater risk of neglect, abuse and exploitation.

World Vision India is doing everything possible to protect these children, starting with supplying dry ration to Preeti and her siblings. When schools in rural areas reopen, World Vision India will assist and support the children’s education. The Community Development Volunteer is also in constant touch with the children and is counselling them during this difficult time.

“We have a future only if we receive help,” says Preeti, in a resilient yet broken voice.