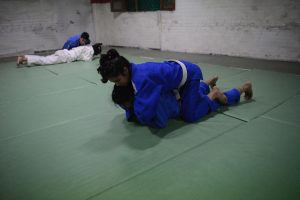 The countdown was getting near. Clad in a blue judogi, Simran’s strong hands were tightly gripping her opponent’s and her feet fixed firm on the ground. She quickly made her next move and pinned her opponent to the ground. She was trying her best to hold her grip. Just when it was getting harder, the referee blew the whistle to call it a game.

This was it! It was the moment when 16-year-old Simran from the Indian state of Haryana had just won her country the bronze medal in the Asian Junior Judo Championship. Back at home in Haryana, Simran’s grandmother, Rajwati, was leaping with joy, clapping her hands, jumping from one person to another giving them a tight hug.

Rajwati’s relationship with Simran used to be different. She was disappointed when Simran was born, to an extent that she didn’t touch Simran for a month after she was born. The reason behind Rajwati’s disappointment was the fact that Simran was the third girl child in the family. 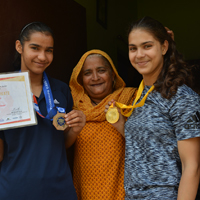 But something changed over the years. “When Simran was born, I kept crying. But today, I’m rejoicing because of her,” says Rajwati. Although Simran and her sister, Rekha, showed keen interest in judo since the time they began learning the sport, their father Manoj didn’t pay much attention to their passion. “I always thought judo was a hobby for both my daughters since they were learning it at school. When Simran and Rekha got selected for a national level tournament, they invited me to the game. That was the first time I got inspired to let them take their passion forward. I never turned back after 2010,” says Manoj.

From crying to laughter, from being casual to being supportive, there was a huge change in the attitudes and perception of Simran’s family towards her. “When I was in the fourth standard, a judo coach joined our school and began teaching us the sport. My sister, Rekha, first excelled in judo and she won several medals in inter-school and district level tournaments. I used to feel bad when she didn’t share her medals with me. That’s when I began paying more attention to the sport and started enjoying it. I also began winning tournaments in the district as well as the state level. In six months, I got selected for the national level judo tournament in Ujjain and so did Rekha,” shares Simran. 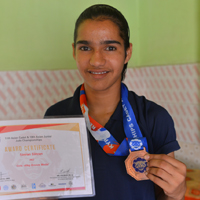 Holding Rekha’s hand, Simran says, “My sister would have also been selected for the Asian championship, but unfortunately she got injured in her leg and was unable to make it in the selection.” “Throughout my journey from the beginning till now, World Vision India supported me and my family,” says Simran, a World Vision India sponsored child.

“Anita, a World Vision India staff member, encouraged us to take our passion forward and become professional judo players. My mother and grandmother joined the Self Help Group (SHG) in our community. The sensitisation programmes to sensitise both men and women about the importance of the girl child truly helped my parents and grandmother understand my sister’s and my dreams,” she added.

“Both my elder sisters were married off after they turned 18 years old, but now my parents have decided not to get me married till I wish to. They know I want to build my career in judo,” says a pleased Simran.

Simran shares a very special bond with her sponsor. After she won the bronze medal at the international level, she wrote to her sponsor thanking them for their support all along. Simran remembers the little things the sponsor gifted her and how the help has motivated her to achieve great things in life. 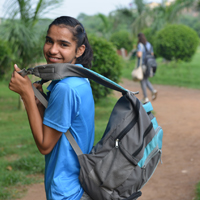 Her present coach, Navin Chauhan, says “Simran finishes her game in 30 seconds to a minute while a normal fight lasts for about 5 minutes. She has reached a higher stage and I’m sure she’ll go a long way.”

Simran’s victory at the Asian Judo Junior Championship was not only acknowledged by her family and friends, but also the Chief Minister of Haryana who visited Simran’s home to congratulate her on her victory. A community group called ‘Basti Vikash Society’ formed by women in the community with World Vision India’s help also acknowledged Simran’s victory and gifted her Rs. 21,000.

What Simran has accomplished is not for her alone. Her accomplishment has set an example for the entire community. There are many young girls who are now dreaming big because of her,” says Anita. She adds, “Simran and her sister Rekha are also hopeful to train other children from this community in judo.”

Concluding it all, she said with her broad smile, “I’m obsessed with judo! I can give my life for it.”