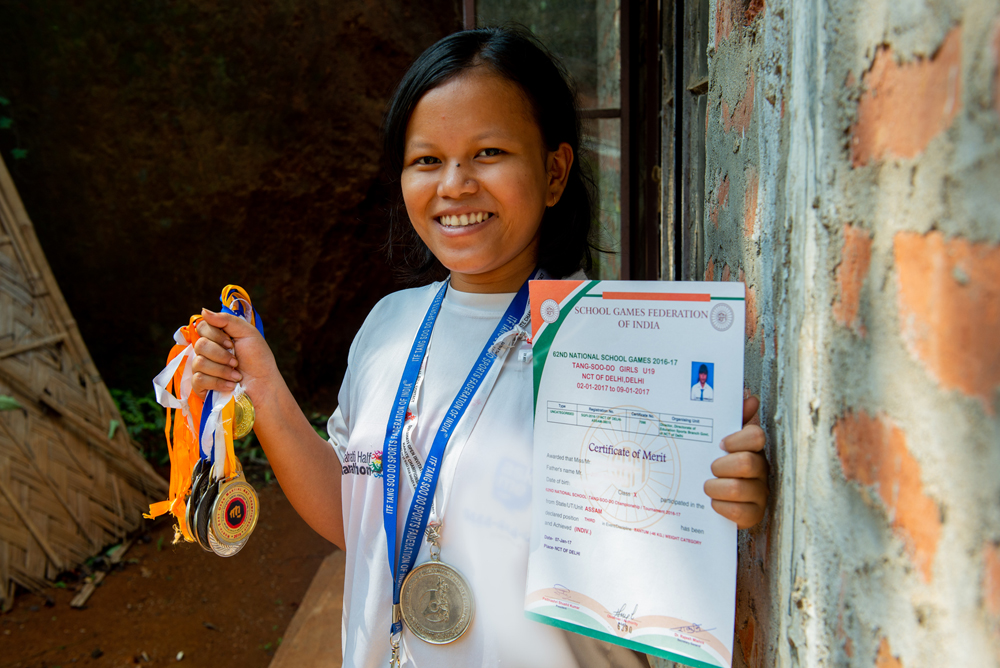 A one-and-a-half kilometre walk, a ten-kilometre ride on a local bus, a little more walking and hours of rigorous training – this is what it took 17-year-old Richa and 19-year-old Prithima, from an underprivileged family in Guwahati to become national-level Tang Soo Do and Tae Kwon Do champions. More than anything, ‘self-defence champions’. 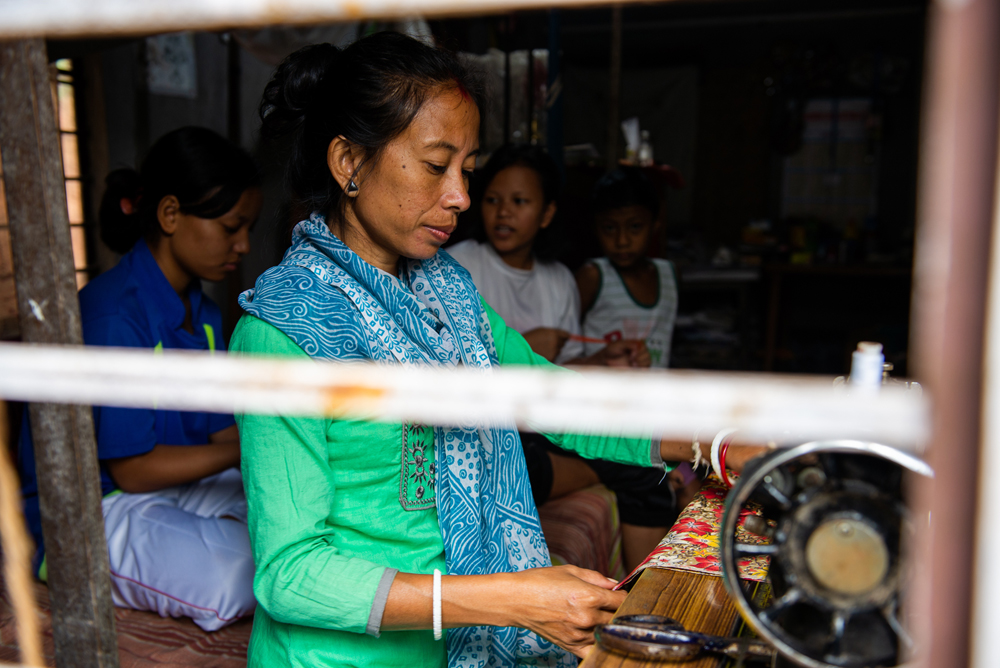 Five years ago, Purobi, the mother of these two girls, was busy stitching clothes on her tailoring machine. Her thin, wrinkled fingers quickly ran a piece of cloth through the machine, and the only thought on her mind was to earn a few extra bucks to help feed her family of four. Just then, World Vision India’s Community Development Facilitator, Anjan, called out her name from the entrance of their home. “We’re going to have a 12-day camp to train young girls in self-defence. Would you like to send your daughters?” he said. A blissful glee spread across Purobi’s face as she quickly nodded yes to Anjan.

Forty girls from communities in this cluster were trained in Korean Karate, also known as, Tae Kwon Do. The aim of the programme was to help young girls become confident and strong, not fearing any form of attack in society. For Richa and Prithima, this was only the beginning of a new life. 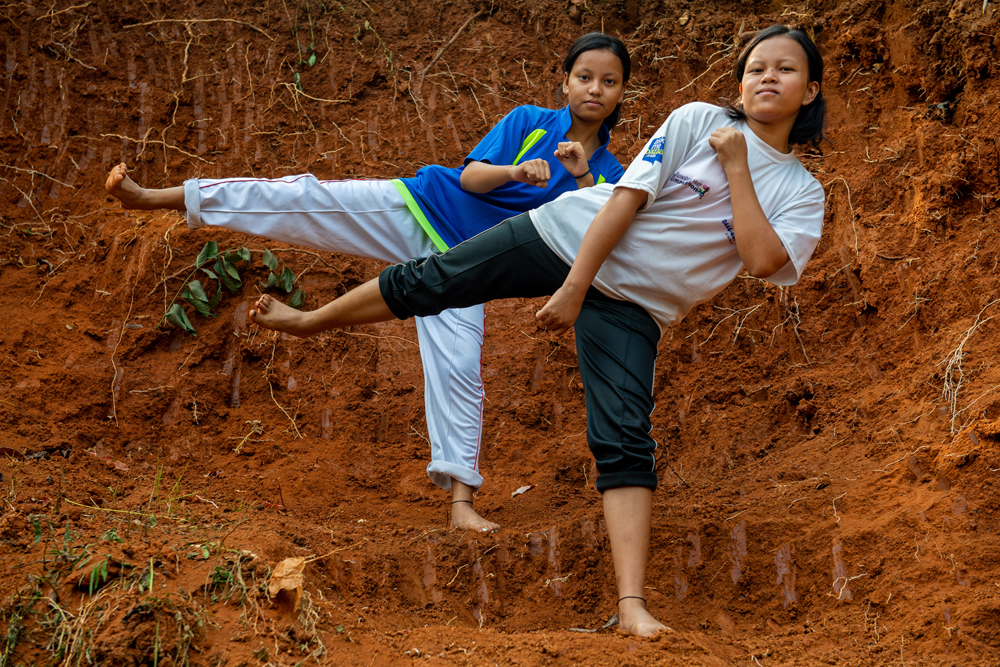 “Self-defence has emboldened me to become fearless. I used to think that boys or men are stronger than I am. There was a fear that I can be attacked. Now, I think differently. I believe I can easily defeat anyone who fights against me or attacks me”, a confident Prithima says. Not just Richa and Prithima, but after the camp, 20 more girls were motivated by the duo and learnt self-defence. The following year, three adolescent boys in their community were also motivated by the girls and joined Korean Karate classes.

“Both of us felt so empowered by the self-defence we learnt in those few days, that we were inspired to pursue the sport further”, says Richa. When the trainers saw the talent in these two girls, they invited them to be trained in Tang Soo Do (another Korean martial art) for the next one year at the Assam Tang Soo Do Sports Association. In July 2015, both Richa and Prithima began travelling about 15 kilometres to be trained in the sport. It was not easy for the girls to manage studies and learn self-defence at the same time. Sometimes, they had to skip going for the training because they did not have money to pay for the travel or they would miss the local transport. Yet, none of this hindered them from pursuing their desire to ace the sport.

Sooner than expected, both the sisters were selected for a district level tournament and won bronze medals. This was their opening to national level games. In January 2016 and 2017, they played at national level tournaments and secured silver and bronze medals. Richa, not only won two gold, two silver and two bronze medals, but also received the title of the ‘Best fighter of the tournament’ at a National Tang Soo Do tournament in Goa in October 2017. Prithima also won three gold medals, a silver and three bronze medals in the same tournament. Ever since, Richa and Prithima have played in over five district, state and national level games and won various medals. Today, both Richa and Prithima hold green belts in Tang Soo Do. Prithima, who has been practising Tae Kwon Do since 2017, holds a red belt in Tae Kwon Do.

For 37-year-old Purobi, this transformation in her daughters’ life is more than the achievements alone. She says, “Learning self-defence has made my girls bold. Earlier I went along with them wherever they went, but now I don’t need to accompany them because they feel safe and confident to face anyone who tries to attack them”. It is not just her but also their father, John, who is marvelled by the girls’ determination and boldness. “Their father feels very proud of them. He always tells everyone around about their ‘go-getter’ attitude and achievements”, she adds.

An array of colourful medals hang on a small wooden door and trophies stand lined up on their 6-feet cupboard in their small home, but this feat was no ordinary journey for the two sisters. When they just began their training, their father was the sole breadwinner of the family. His income was only sufficient to look after their basic needs, so paying their travel expenses for training was beyond his capacity. At that time, World Vision India stepped in and supported the family by providing them with a petty shop as part of an Economic Development Assistance (EDA) intervention. Purobi, who earlier worked as a helper at a tuition centre, began looking after the petty shop. Those days she had to leave her girls alone at home and go to work. “I used to be worried about their safety. Now, I’m not only at home but I also know that they are capable of defending themselves in case I’m not around. My income from the petty shop is also higher than what I earned at the tuition centre. This helps me pay Richa’s school and Prithima’s college fees”, she says, joy brimming from within.

Learning self-defence has not only helped the girls become bold and sports champions, but it also became a means for them to pursue higher education. Two years ago, Prithima wanted to join a well-known junior college in Guwahati after completing her 10th standard. She secured a good score to get the admission but was unable to receive a concession under the sports quota because the coach at her training centre refused to give her the certificate. This was a huge blow for Prithima because she worked hard to ensure she gets admission under the sports quota with a low fee. Anjan, World Vision India’s CDF, then supported Prithima and her family and helped them legally appeal the coach to handover the certificate. Prithima finally received her certificate in a month’s time and got admission at the college. She is now in her second academic year of junior college, and plays at various national level tournaments alongside pursuing her education. 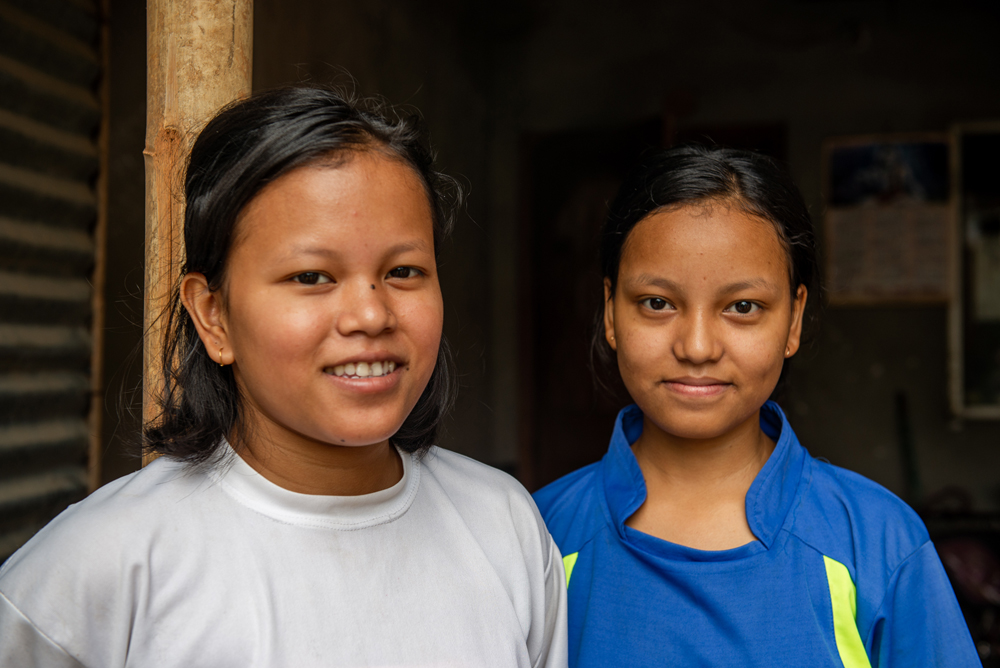 Prithima, who is a World Vision sponsored child, says, “As the elder child, I wanted to take every negative thing and make it positive for my sister and family”. Richa, now studying in the 10th standard, wants to pursue the sport and play international games. She says, “I feel good that other people know me and recognise me because of this sport. Many families in our community see us and are inspired by us”. Recently, a Community-Based Organisation (CBO) in their village honoured and recognised the two sisters for their achievements – a proud moment for the duo and their parents.

World Vision India has run these self-defence trainings in various parts of the country where crime rates against women have been on a rise. Thousands of girls from poor and vulnerable communities are trained in self-defence, shifting them from being fearful to fearless of those who mistreat and attack them. This year, even the Indian government has asked all states in the country to avail funding for Self-Defence training in an Integrated Scheme for School Education. Self Defence training will be imparted to girls from classes 6 to 12 studying in government schools. For girls from underprivileged families, this move brings hope to dream big just like Richa and Prithima.

Learning self-defence helped the two sisters – pursue higher education, become sport champions and, above all, become confident and fearless. Purobi notes that girls from their community have all become bold. She says with pride, “I see my daughters as equal to men, they are no less!” 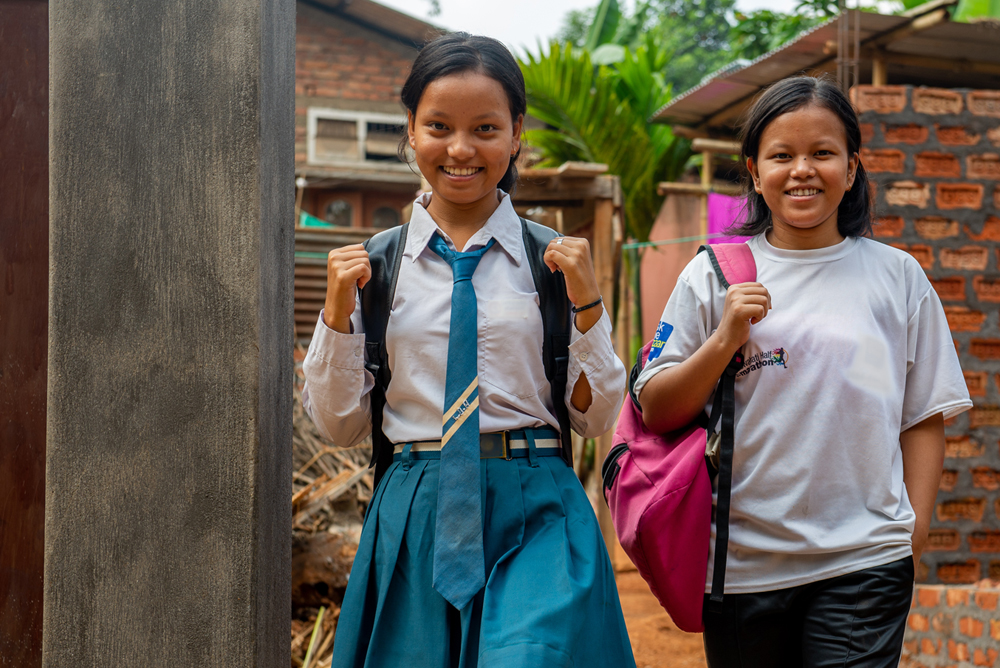 One thought on “Self-Defence: She is ‘No Less’”