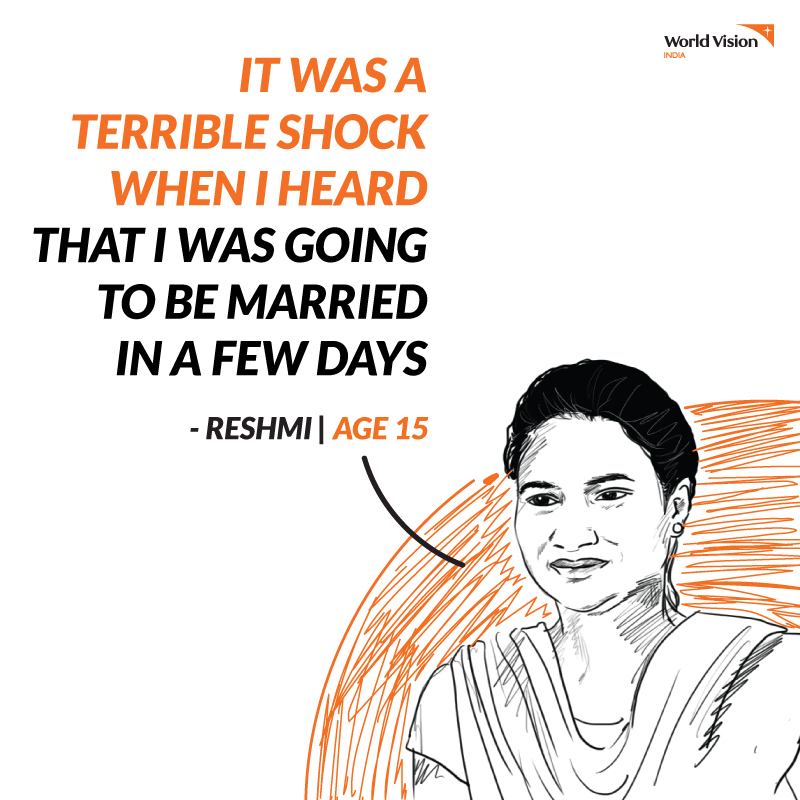 Reshmi is a 15-year-old, timid and calm girl studying in the 9th grade from a community in Dumka, Jharkhand. When she turned 15, her parents wanted to get her married at the earliest. Even though Reshmi was eager to continue her studies, she was under constant pressure from her parents and relatives who kept looking for prospective grooms.

Then one day her parents found a suitable boy and arranged her marriage, without even consulting her. Reshmi could not believe what was happening to her life. She says, “It was a terrible shock for me when I heard that I was going to be married in a few days. I was scared and hopeless after hearing the news,” says a heartbroken Reshmi.

She continues, “I didn’t want to leave my education and get married at the age of 15. But my relatives, villagers and parents did not hear me when I begged them to stop,” says Reshmi.

A worried Reshmi realized that she needed help and counsel in this situation, and so she decided to share her dilemma with her friends in the children’s club. The group was formed by World Vision India in Reshmi’s village and has 35 members.

After talking to her friends in the group, Reshmi felt better. She tells us, “My children’s club friends gave me hope and promised to fight for me,” says Reshmi with a smile.

The children club members approached Reshmi’s parents, relatives, village elders and the local child protection unit and compelled them to take action. Sighting Reshmi’s young age and her desire to study, the group members unitedly and persistently pressurized the elders to call off the marriage, thereby giving their friend the freedom to continue her education.

With a dream of pursuing a career as a nurse, Reshmi realises that she has to focus on her studies now. She promised her parents, that she would get married only after completing her education. World Vision India’s field staff also approached Reshmi’s parents and counselled them on the importance of education and the dangers of child marriage.

“We realise that we made a big mistake by compelling our daughter to get married at an early age. Now we want her to study well and pursue her interests,” says Reshmi’s mother.

Reshmi is a happy now as she continues her education and eagerly attends school. She even motivates her friends, classmates and young girls about the importance of education and makes them aware of their rights as a child. After this incident, no child marriage has taken place in Reshmi’s village.

Reshmi’s community has also become aware about the rights of children and the need to educate their kids. This was possible through several World Vision trainings in the children’s club and awareness sessions in the village to promote education and the need to protect children’s rights.

Because of groups like the children’s club and child protection unit, young girls like Reshmi can dream big and rest assured that they will find the necessary support in difficult times.