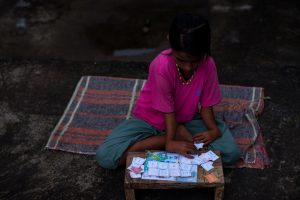 At the community centre, Kashish, aged 11, was the first to arrange all the Matching Number cards in correct order, picking each card with precision and focus. She does not stop to chat or share small jokes with her friends. Seated on a mat, she arranged the cards in six rows and four columns neatly.

Kashish’s father is a small time electrician and her mother, a housewife. She lives in a small house with her parents, two brothers and grandmother. She studies in the third standard and goes to a private school near her colony.

Kashish is quiet and reclusive and keeps it to herself. “She speaks very little. I don’t know why but she keeps quiet. At home she speaks well but outside she doesn’t speak too much,” says her mother.

Kashish is a child with a disability but it has not stopped her from achieving her goals. “She is very good with her studies. She comes in second position in her class of 19 students,” says her mother beaming with pride. After school, Kashish attends a private coaching class; a privilege her mother thought would not have been possible without help from World Vision India. 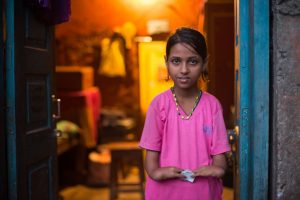 received small gifts and cards from time to time from her sponsor. “We are learning subtraction, addition, division and least common multiple in school and this game can improve my math,” she says about the latest ‘matching number card game’ gift. This game is designed to help children learn addition, subtraction and division in pictorial forms, also building their photographic memory.  She also teaches her younger sister who is in kindergarten.

She has not met her sponsor’s family. On being asked if she would like to meet the sponsor, she answered, “Yes I would like to see their faces.” In the fading evening light, she spread her mat on the terrace of her house and arranged the cards.  Her younger sister and brother frolic around her while her mother stands with a smile on her face.

“I’m grateful for the all the gifts,” says Kashish. She wants to continue her studies and her parents are very supportive of her dreams.  Her father is also a person with a disability similar to her. Nothing has stopped her from pursuing her dreams. “In school, she does everything normal, except that she is a little quiet. Most children treat her well except for just one or two who don’t understand.”

Kashish is not bothered by all of that. She is determined, “I would like to become a teacher,” she said.

9 thoughts on “Overcoming the Odds with Courage”