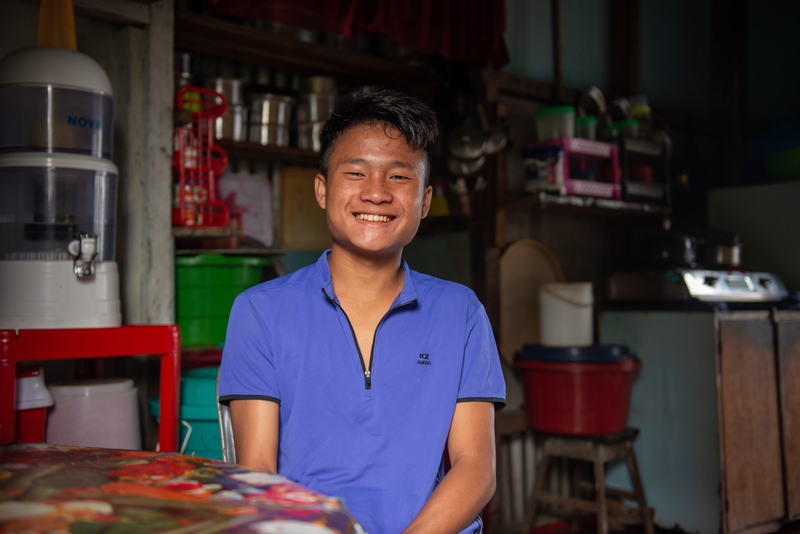 Himnakulhpui, aged 14, and his sister Lalraupuii walk home with buckets of water and empty it in a tank just outside the house. It is still early in the morning and their mother Lalbiaki prepares breakfast for the family of three. Collecting water before school is an ordeal Himnakulhpui fulfills, without qualms. 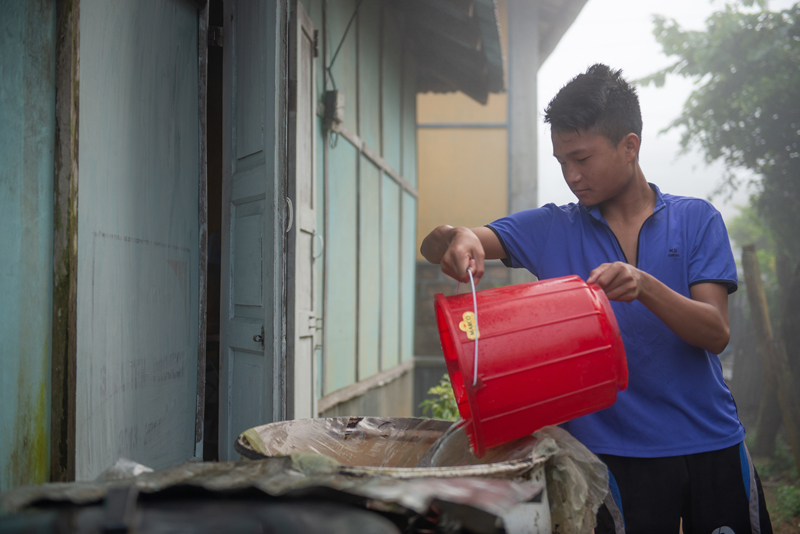 This duty dwarfs in comparison to all the hardship and poverty he has seen in his short life. After an early lunch, Himnakulhpui takes the bus to Lawngtlai town, around 5 km from his village to attend school.

Lalbiaki’s and her children’s lives plunged into poverty when her husband passed away leaving the young family without a source of income. She took upon herself the responsibility of raising her children but life was tough. They had no house or a plot of land to call their own; they stayed in a small rented room. This was a major expense for Lalbiaki who dropped out after completing 4th standard and her jobs were limited to working as a hired farm hand. She wanted to give a better start for her children but things were so bad that she watched her daughter Lalraupuii drop out of school after the 4th standard just like her. Her daughter was sent to live with her grandparents in another village. This was one of the the lowest points in Lalbiaki’s life.

“Life is difficult for a widow without a regular income. The situation can be very difficult if I become unwell. Then the family is left with no source of income and without food,” says Lalbiaki.

Things began to look up for the family in 2014, when they became one of the beneficiaries for shelter assistance from World Vision India. Lalbiaki’s brother leased out a plot of land for them to build the house and, now, within few months they have a two-room house. This was the family’s first house. Since 2012, around 275 families have benefited from the shelter assistance from WV India.

“Having our own house makes us feel so much better. Earlier we lived in a small one-room house. Here we have enough space and can practice better hygiene and children have enough space for reading too,” says Lalbiaki. 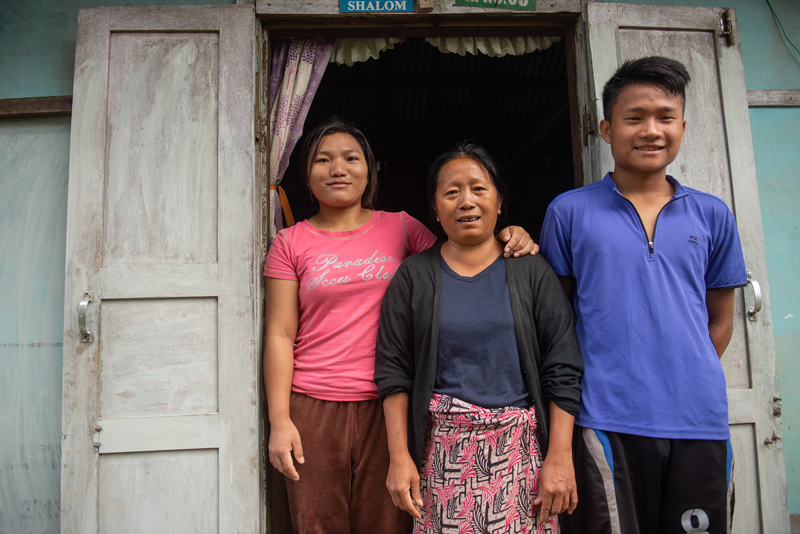 By having a house of their own, they were able to divert the money they spent on rent to other expenses like education and food. But even then, the family’s fortune was fully dependent on Lalbiaki’s deteriorating health. The family needed a push and the breakthrough came in 2017, in the form of World Vision India’s Graduation Model assistance. Graduation Model targets extremely poor households in the community to help them rise from poverty to sustainable livelihoods. The programme combines elements of three distinct approaches—social protection, livelihoods development and financial aspects. Graduation Model programmes are of three types: farm-based asset, like cows, poultry etc, non-farm-based asset like Grocery Shop, skill trainings etc. and sometimes mix/multi–asset, which is a blend of both.

The family received 100 chicks in two batches along with three bags of bird’s feed. They were able to raise the chicks and sell them for profit.

“With the money I got from selling the chicken, I was able to send my daughter for handloom weaving training,” said Lalbiaki. 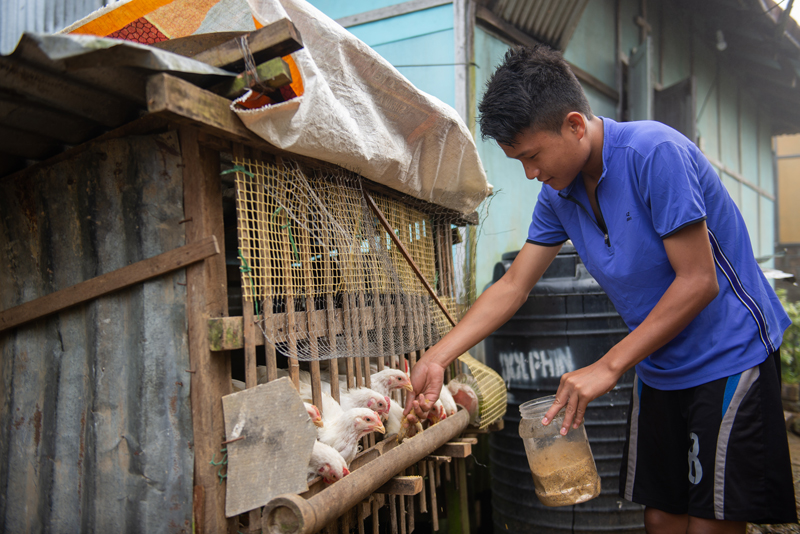 Today, Lalraupuii is employed in a traditional hand loom weaving workshop at Lawngtlai town and earns a stable income every month. This is a big upgrade for a family that did not have a steady source of income. Through the Graduation model, World Vision provides assistance for immediate needs of families, with long-term investments in training, financial services and business development so that, within two years, people living in extreme poverty are equipped to help themselves with the available coping mechanism to move out of extreme poverty. The family bought ten new chicks and are planning to add ten more in the near future.

“I didn’t know anything about savings before attending WV India’s trainings. Now I have opened a savings account and have started saving a little,” says Lalbiaki, who is also a member Self-Help Group started by World Vision India.

Himnakulhpui is the first from the family to get a shot at education. He continues to carry the family’s dream and hope on his shoulder. He is in the 9th standard and is also part of Children ‘s Club. 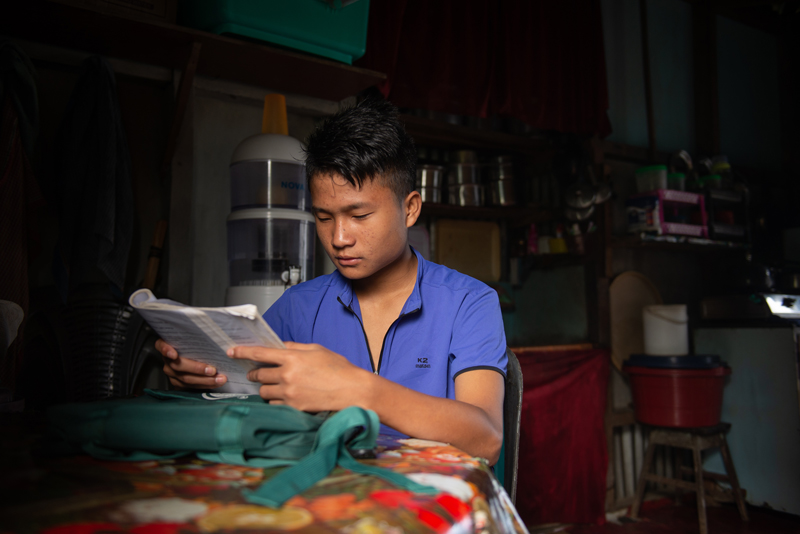 “This year, we were able to move him to a good private school in town. He is doing very well in school,” says the elated mother.

“I like science and math and I want to become an engineer one day,” says Himnakulhpui with a broad smile.

4 thoughts on “Overcoming Poverty with a Little Help”