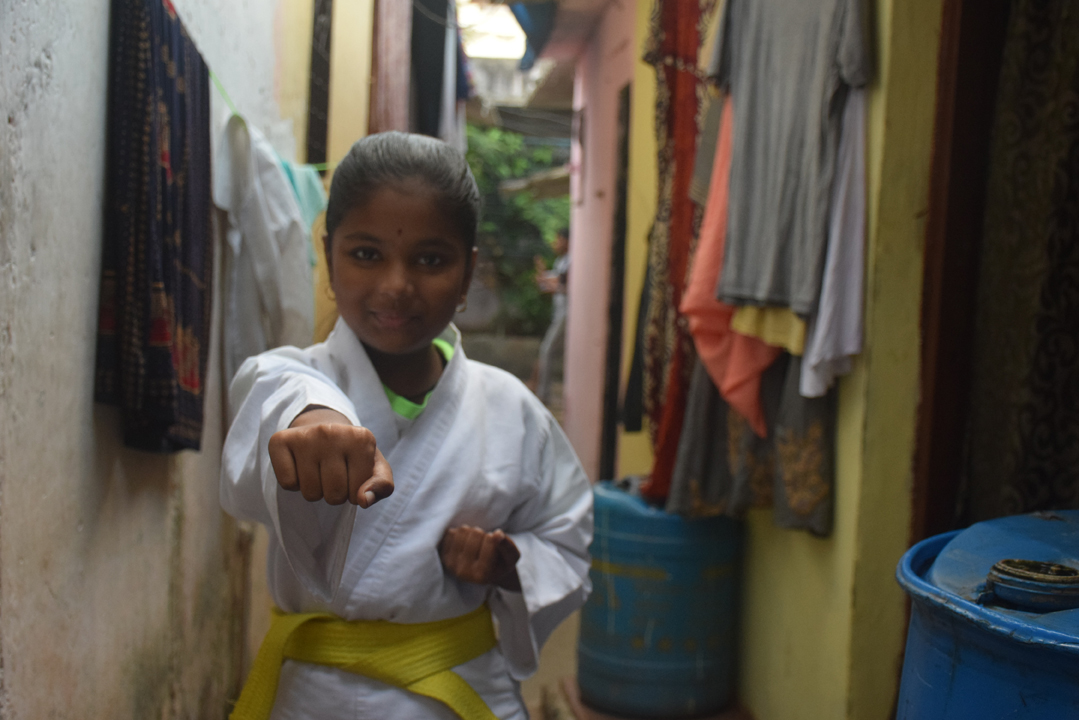 14-year-old Lavanya is excited to finally learn Karate. It was a sport she saw boys learning, but never thought that she would get the opportunity to do so herself. She lives with her family of six in a small house in an urban slum in Mumbai. Her father Sanjay works as a security personnel and her mother is a homemaker.

When she isn’t practicing her Karate moves, Lavanya enjoys drawing and watching television. However, with three sisters (the oldest being 18) and one younger brother, Lavanya feels like her family’s dreams rest on her shoulders. Her father considers her the brightest among her siblings and that is what pushes her to give her best.

She says, “I want to become a collector someday. I saw a television show in which there was a lady who was a collector. I know I will have to work very hard for that, but I want to make my parents proud,” says Lavanya with a smile. Lavanya is currently studying in the ninth standard and is a sponsored child of World Vision India. 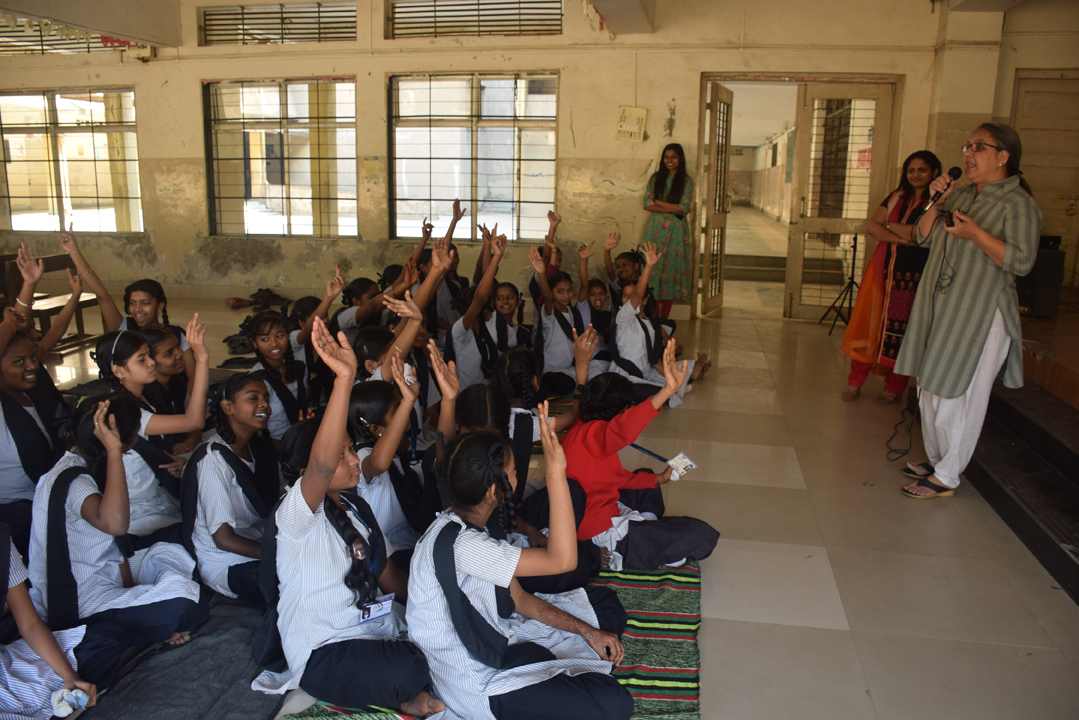 Her sponsorship journey began when she was in the third standard and she feels that it was a crucial moment in her life because that is what brought about a shift in her personality. From being a shy and quiet girl, Lavanya has become a bold and fearless girl who doesn’t think twice if she has to defend herself. Armed with a yellow belt in Karate, she is becoming a girl who her classmates look up to both inside and outside the classroom.

“I was a very shy girl and low on confidence. I would get so scared to even hold someone’s hand. I would only watch TV at home and I didn’t even study. I never participated in any programmes in the beginning. But after I was sponsored I started attending World Vision’s programmes. Slowly I made more friends and started to learn so many things. I can proudly say that the biggest change in me is my confidence. Now I am not scared to talk to anyone. I have overcome my shyness and enjoy all that we do in the World Vision programmes,” says Lavanya. 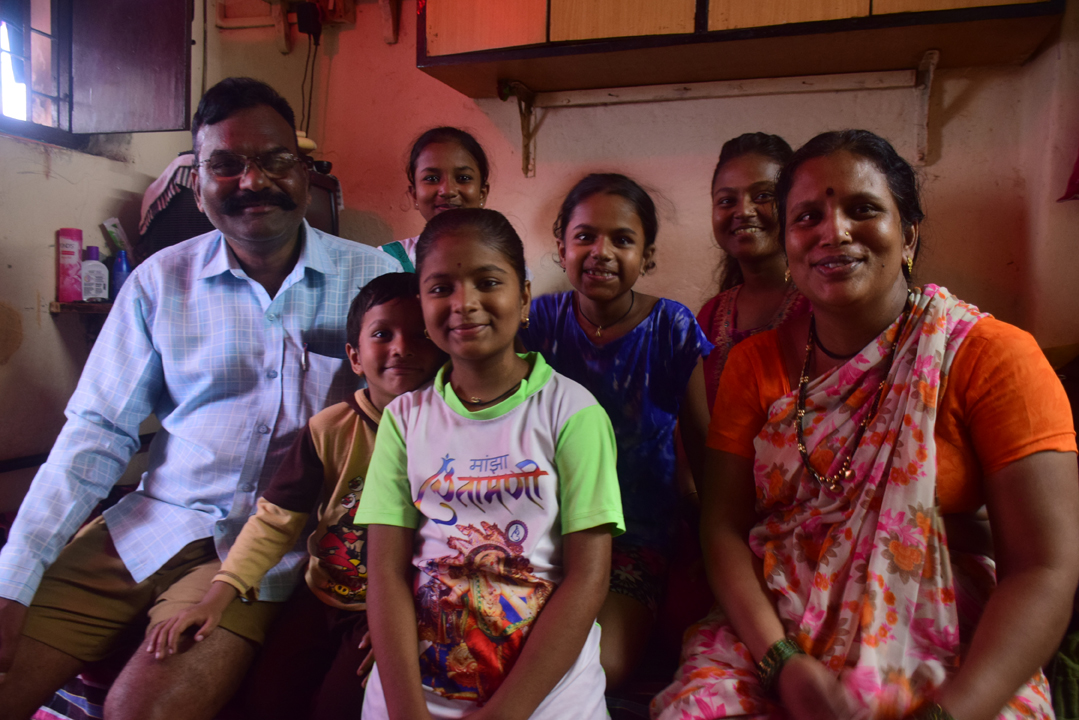 Lavanya not only notices this change within herself but feels that overall, the confidence level of children in her community has improved significantly. Earlier girls like her would be confined to home and not allowed to go out for meetings. But after looking at the work of World Vision in the community, parents soon realised that their children were learning and growing. By being a part of the children’s group formed by World Vision in her community, Lavanya helps identify any issues that affect children and works along with other children and community members to solve them.

Lavanya explains, “Through World Vision we get to learn so many new and interesting things. There are so many things that we learn here, that we don’t learn in school. My sisters and I attend all the programmes conducted by World Vision. We learnt about health and personal hygiene, menstrual hygiene, our rights and safe and unsafe touch.”

But more than anything, Lavanya is grateful for the opportunity to learn Karate. She is among 30 other girls in her community who took up learning Karate. “World Vision gave us the Karate uniform and the classes free of cost. We meet every Sunday and Monday. We only had to pay for the belt (as and when we progress to higher levels). Through Karate I have become stronger and more confident. Self-defense is about protecting oneself by not necessarily harming others, but by learning how to scare the other person. I know punches and kicks. In school, I don’t allow people to bully me or others. They know that they shouldn’t trouble me,” says Lavanya with a smile. 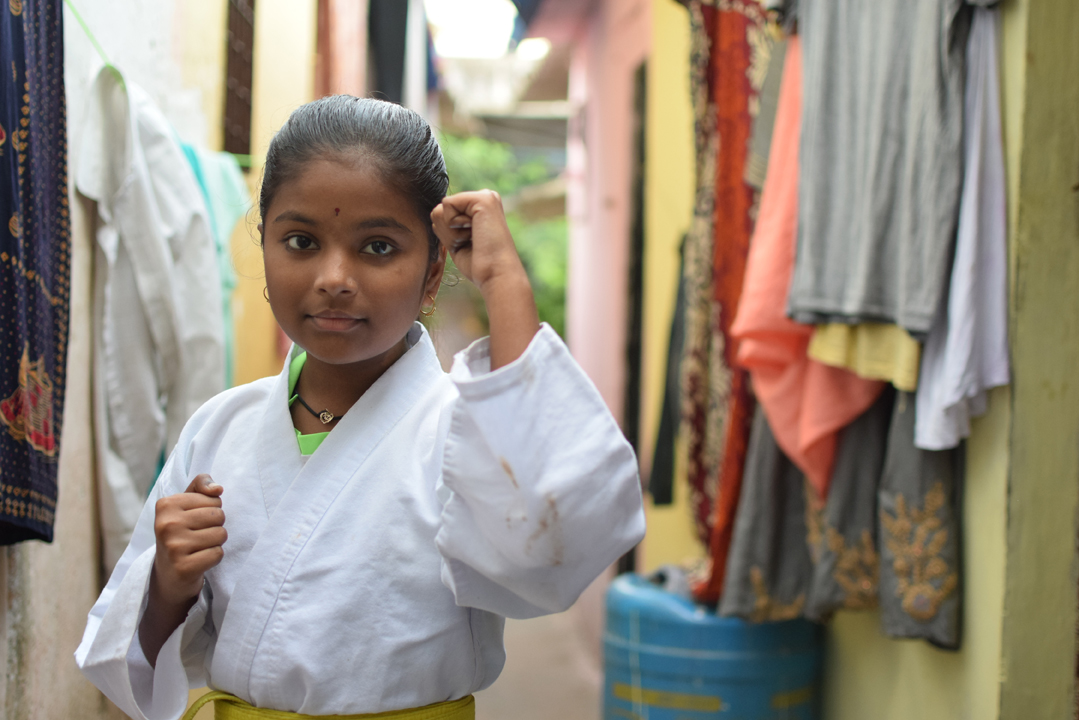 Lavanya understands the hopes that her parents have for her. She looks endearingly at her 5-year-old younger brother Sarthak who grins and says, “My sister is my bodyguard. I don’t have to worry when she’s there”. That’s all the reassurance that Lavanya needs to keep pushing forward to learn new moves, teach them to her siblings and walk confidently towards her future.