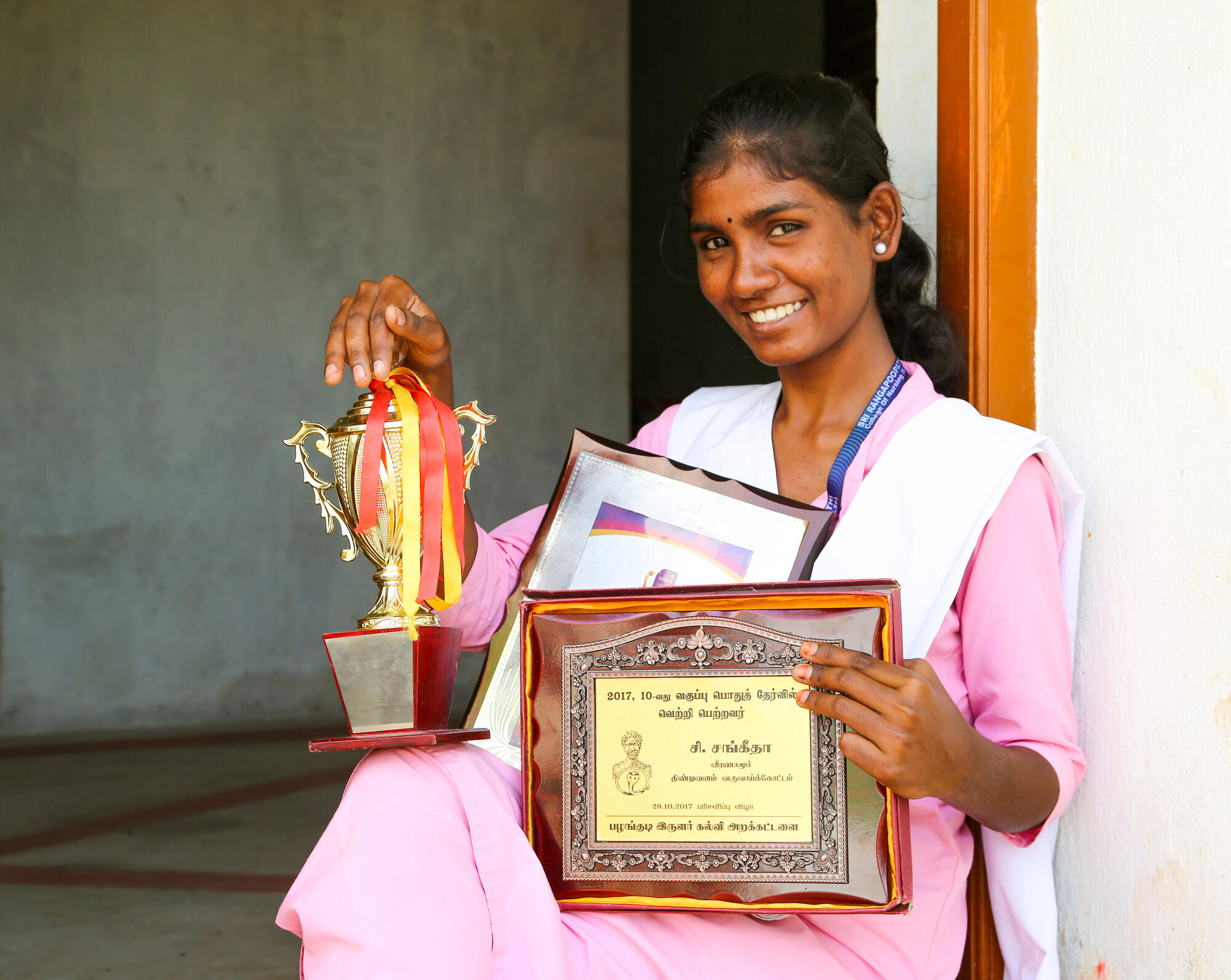 With new clothes, a new pair of footwear, a brand new watch, a bag, and a broad smile, Sangeetha remembers her proud walk from her house to catch the bus for her first day of college. She had never dressed like this before. “I had mixed feelings of surprise, fear and pride on the first day of my college,” says 19-year-old Sangeetha from a community World Vision India serves in Gingee, Tamil Nadu.

Sangeetha is the first one to do so. She is currently pursuing a Bachelor’s degree in Nursing.

Her childhood was not a pleasant one. She spent her early years with her grandparents as her parents worked in a brick kiln in another city as bonded labourers. Sangeetha would only see her parents twice or thrice a year for a day or two.

But when Sangeetha was seven years old, her parents were rescued from bonded labour by the state government. The family was still in dire poverty but Sangeetha was overjoyed to be with her parents.

The experiences of her parents as bonded labours and the challenges that her family was going through made Sangeetha yearn for a better life and she quickly realised that education was the only way to do so. She also shared her decision with her friends. “I decided that I wasn’t going to let my parents go back to the brick kiln and the only way to do it was to educate myself,” she says.

When Sangeetha was studying in a government school, she didn’t have to pay school fees. However, she did not know how to fund her college fees and whom to approach. But she knew in her heart that she shouldn’t trouble her parents with it.

After hearing the news, Sangeetha’s friends were surprised and proud of her brave decision to continue her education. Though many girls were interested to study, they didn’t want to break their community’s early marriage traditions because of the pressure from the family.

Sangeetha applied for a Bachelor’s degree in Nursing. But as nobody from her village had studied in a college before, the college management was hesitant to give her a seat. But after looking at Sangeetha’s desire and her confidence along with the recommendation from World Vision India, Sangeetha got a free seat in her college.

Sangeetha’s family received three goats and eleven chicks as part of World Vision India’s “Economic Development Assistance” programme to help her with her studies. Her educational requirements will be met by selling goats and poultry as they multiply.

They also received organic seeds to produce vegetables under the “Kitchen Garden” initiative of World Vision India that supports children with healthy food.

“Education is my strength,”says Sangeetha.

Sangeetha is now in the third year of her undergraduate degree, the news about her interest and passion for her education despite all her odds has reached many other educational institutions and organisations through her college staff and friends. She has been getting many awards and encouragements from various institutions, television channels, and organisations for her desire, hard work, and passion for education. Articles about Sangeetha have also featured in newspapers and television programmes. 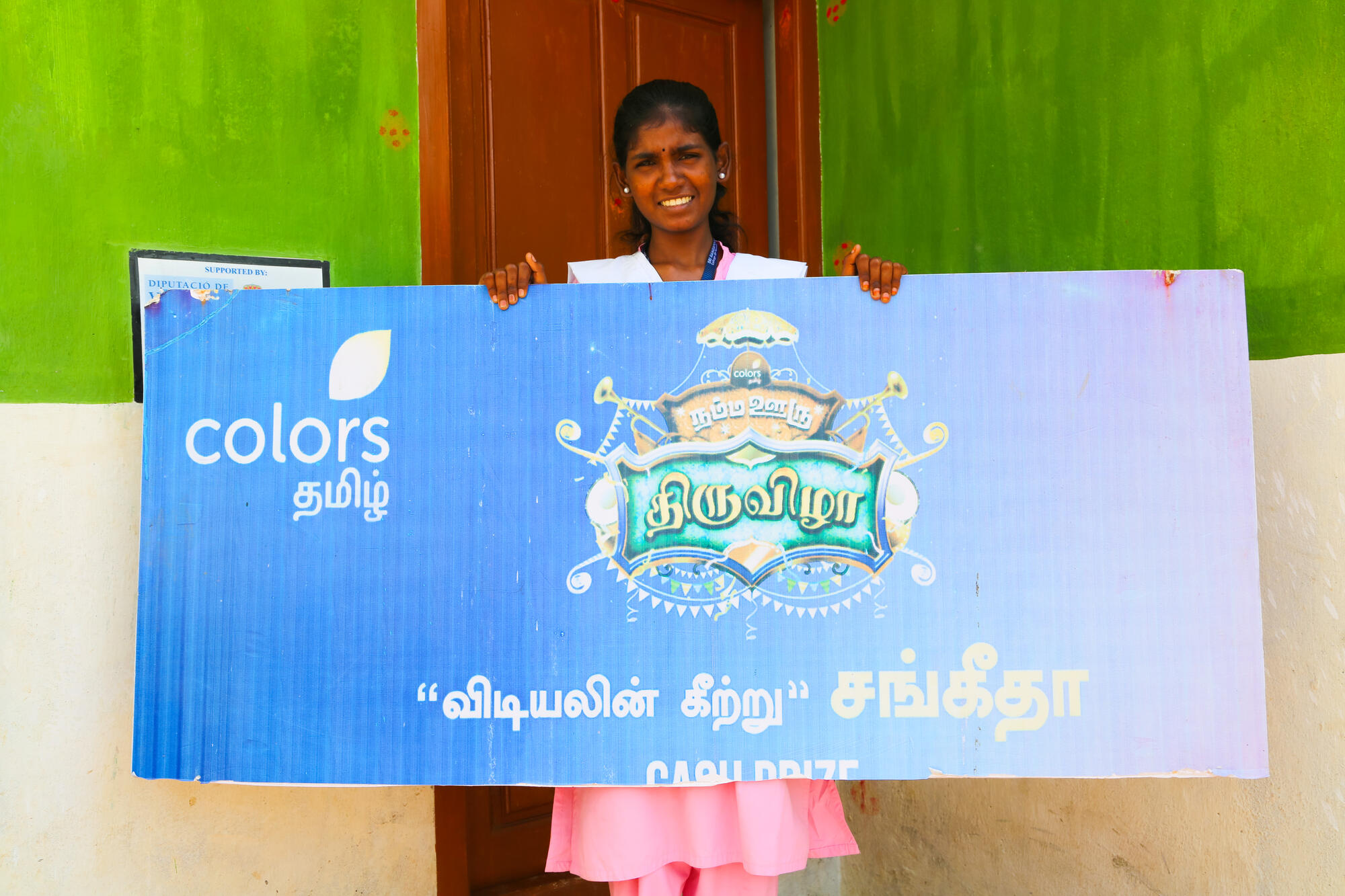 “One of my teachers told me that the college is proud to have me as their student”, says Sangeetha.

Sangeetha’s success is not limited to education alone. She has become a revelation of her village. Other girls in the village aspire to be like Sangeetha and are continuing their studies after finishing high school. Many young women have expressed their regret for marrying early instead of educating themselves. Sangeetha considers this as a great success of her life.

“Education liberates women,” says Sangeetha. She wants to see the girls in her community have an education and not getting married before 18. She believes she is on the verge of accomplishing this objective. She wants be a nurse to serve people. Sangeetha says that she will be grateful to all the people who have helped her, especially World Vision India.

Sangeetha remembers walking into her college on the first day with great joy, and still, that same thrill motivates her to continue her educational journey.

“I strongly believe that education is the only way to make our parents proud,” says Sangeetha.

8 thoughts on “Education is her strength”