In ancient Indian traditions that span over seven thousand years, nature is accorded the deepest respect. Earth is called Mother as she nurtures civilizations of people, animals, plants and giving us all we need – food, shelter, sustenance and water. In the last few decades our mother Earth is unable to cope with the pressure of unreasonable demand and the effect can be seen from the parched vast lands that lay drought ridden and lifeless.

Drought is an immediate reality in India with over 25% of India’s population; 330 million to be exact,hit by drought and facing severe water scarcity. Multiple failed crops due to the drought resulting in rising debts, have forced hundreds of farmers to take their own lives. According to government records, 216 farmers in just the Marathwada region (just 400kms from the financial capital of India) have taken this extreme step between January and March 2016 alone.

To reinstate the extent of the drought over 50 blocks in Uttar Pradesh, 35 out of 51 districts in Madhya Pradesh, 231 out of 443 rural blocks in Telangana, 196 blocks out of 670 in Andhra Pradesh, 600 villages in Karnataka have been declared as drought-affected. We are facing a severe drinking water crisis owing to one of the worst droughts since 1972. This is just a sample of what is happening all around. Though the respective state governments have allocated funds, and are supporting by providing water, there is a lot more to be done. 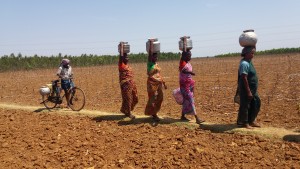 The severe drought and acute water shortage has resulted in massive migration that has taken a toll on the well-being of children. Nearly 50% families have limited their regular intake of food to potatoes and rice, or wheat and potato with some salt. Lentils, which are a source of essential protein, have become unaffordable. Malnutrition is just the beginning of the problems.

When parents go to work children stay outdoors susceptible to sunstroke, severe dehydration, sickness and potential abuse. Some of the children drop out of school to work as daily labour. When the heat wave continues with the current highest temperature of 43 Deg Celsius you can’t expect normal life to go on and it is really a matter of survival.

In Visakhapatnam, where the main livelihood is fishing, life has been really slow due to government ban on fishing due to breeding season. The full extent of water shortage and its effects are yet to hit as temperature is rising, jobs disappear forcing people to migrate to other places. The worst effected here too are children who stay outside as parents go to work. Same situation is found in Kandukur Mandal of Prakasam district where the red soil mixed with rocks makes it difficult to store the already deficient rainfall (~-59%) forcing people to work as daily labour or migrate to towns. 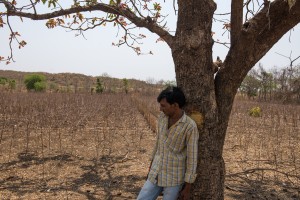 Yavatmal in Maharashtra has similar situation. The region is already stricken with extreme poverty and farmer suicides, and with no rainfall this year, the farmers are desperate. “We are asking for water. It’s difficult to survive, painful to visit farms and watch crops dry,” said a farmer. Praying is all the farmers can do. There’s no water for the cattle. The lakes and reservoirs are dry, and the crops are dying. A drought-like situation is declared in all 16 tehsils of Yavatmal. 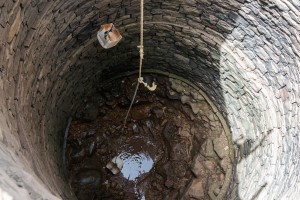 When clean drinking water is a luxury, everything else stalls.World Vision India is initially focussing on 12 districts in MP, UP, Maharashtra, AP, Telengana and Odisha and then scale up to Marathwada & Bundelkhand regions.

With a vision to prevent families from selling their livestock and to avert death of cattle, World Vision India will open up veterinary camps and work towards livestock management. Our immediate response would be to provide water and food to children and families affected by drought. Through food/cash for work programme, we will be providing livelihood assistance to families.

By focussing on livelihood protection and diversification, advocacy for improved social safety nets, and drought-related disaster risk reduction activities household access to food will be improved in the long term.

World Vision India is also working closely with SPHERE India and the Inter-Agency groups for a joint effort in responding to the drought situation. 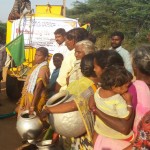 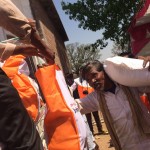 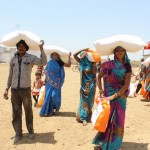 Would you let these innocent children suffer and perish? Have a heart and helps us help these little children and their families survive this extreme summer. Your contribution could help save lives.Show that you care. Rush your help now!

2 thoughts on “Drought in India”