In the middle of the day, 16-year-old Mumta walks back with a pot on her head after collecting water from a newly installed water point near her house. Her life has changed drastically in a couple of months. She was the sole provider of water for the family of five, and it was a task that takes its toll.

Just a couple of months back, Birsabasa, a village of around 100 households had only one water point: groundwater pumped up to a 500 litre water tank. At dawn each day, Mumta stood in the queue with other women from the village. This was an activity that took up a lot of their time: a difficult ordeal for women in the village. On average Mumta spent four hours a day collecting water. Each person was allowed to collect only two buckets at a time.

The availability of water was fully dependant on electricity, as groundwater had to be pumped up to a tank. Disputes over water were common during the rush hours. School going girls like Mumta do most of the manual work of collecting water, before heading to school. Then after school, she would spend a couple of hours at the village water point, but water was never guaranteed. During dry seasons Mumta’s family of five would go by with just four buckets of water. 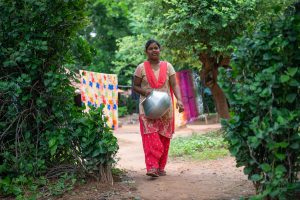 “Earlier I had to stand in the queue for an hour or so to collect two bucket of water. I would wake up at 4 am and head straight for the water point,” said Mumta. At times she would miss school just because they didn’t have enough water to clean up.

Phulmani, 24, mother of two children, Arya, 5 and Bandi, 3, has always drawn water for her family of seven, including her in-laws. Phulmani had to wake up at dawn every day to collect enough water for the entire family. But even then, they had to depend on other sources to meet their water needs. They go to Garga River that winds around the village for washing and bathing. The river passes through Bokaro city carrying all the effluents of the city along with it. The villagers dug into the sand at the riverbed and wait for seemingly clean water to collect but it is equally contaminated.

“My two children often have boils on their head after bathing in the river. Diarrhoea was very common in the village. During periods we use clothes washed in the river and we get infection from that,” said Phulmani. Diseases from contaminated water were rampant.

Villagers never sought for a better life even though the situation was grim. They were numb to the suffering and endured it as if they were meant to. They have never had the luxury of clean water and didn’t know what to expect. 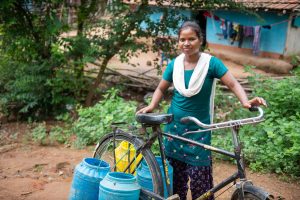 Laxmi, 23, a college student provide water to her family of 13 members strong. She rode a bicycle with two jars dangling from either side of it. She spent an average of two hours in the morning, and another two hours in the evening fetching water. This leaves her with very little time for studies.

“I always worry about water, even at night. On days when there was no water in the house, my parents wouldn’t let me attend college,” said Laxmi. 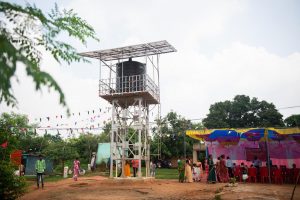 World Vision India installed a 5000 litre overhead water tank, with solar panels powered self-functioning water pump. The water is then distributed all over the village through four water points.

“Now I have no worry for water. I can come anytime of the day, even after school. Water is now made available 24 hours a day. We thank World Vision India for it,” says Mumta, who has come to collect water after school. Now there is a water point just across her compound. 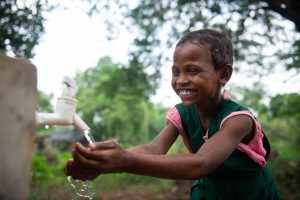 The availability of clean water in the village has freed school going children from the additional pressure of providing water for the family. For the first time they can now attend school without worries.

Women bore the brunt of water shortage more than men who were simply bystanders in all of that hassle. “Now men come and fetch water because they don’t have to stand in a queue. Earlier no men would fetch water, now we see them all the time,” says Mumta.

The availability of water has opened a whole new avenue of opportunities for the villagers and has made life relatively easier. World Vision India built toilets in the village few years back but most of them were unable to use it because of water shortage. Girls like Mumta walk half a kilometre across Garga River and to the wooded hills to defecate in the open. This was an unsafe practice and they were put to harm’s way.

“Without toilet it was difficult to walk so far into the forest during pregnancy and rainy seasons. Sanitation has improved and water borne diseases have gone down after the overhead tank was built,” said Phulmani.

By tackling water problem World Vision India has helped solve major health problems in the village, especially by preventing water borne diseases. Water, which was a luxury not long ago has now been made available for free. WV India has installed overhead water tank in Jamgodia, Chas and Satanpur cluster at Bokaro District, and has benefited 2707 people.

There are people coming and going at the water points. There are no rushes though. For the first time Mumta doesn’t have to worry about waking up early to fetch few buckets of water. She can dream of school and try to make up on the learning and playing she has missed out, a luxury she was often deprived of.