“If World Vision didn’t organise those meetings for my parents, I may have been married off as a child,” says Khushbu, a 19-year-old girl from urban slum pockets of Gurgaon in India. This region in India still has one of the most skewed child sex ratio in the country (893 females per 1000 males according to India’s latest National Family Health Survey-5 data) and is home to many child brides. 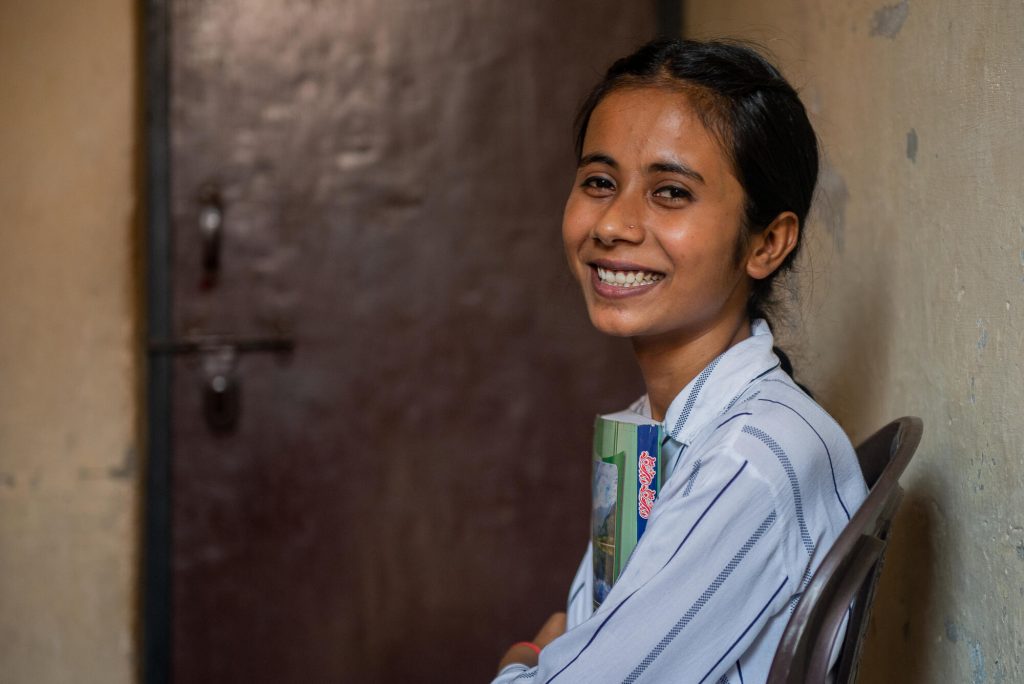 When Khushbu’s parents, Sudhir (her father) and Sanjudevi (her mother), migrated from Jharkhand to Gurgaon about twenty years ago, they had to face a lot of flak and societal discrimination for giving birth to three daughters and not having a single son. For them, they felt hopeless about their future because that is how the society made them feel about having girls.
“Earlier, we had this mindset that we should get our daughters married off between 12 to 18 years of age,” says Sanjudevi. Sudhir immediately adds, “Our mindset was different because we gave importance to societal views about having girls. We used to be in a dilemma whether we need to educate them or not.”

Thankfully, it was around the same time that World Vision India began working in the community where Khushbu’s family lived and were addressing issues like gender discrimination and girl child education through its programmes.

Khushbu was only six years old at the time and was registered as a World Vision sponsored child. Through her sponsorship, Khushbu’s parents began attending programmes like Positive Parenting training, Capacity building trainings for Community-Based Organisations, Self-Help Groups. The entire family, Khushbu’s parents and her two elder sisters, were benefitting from these programmes. Khushbu and her sisters were also part of the children’s group. 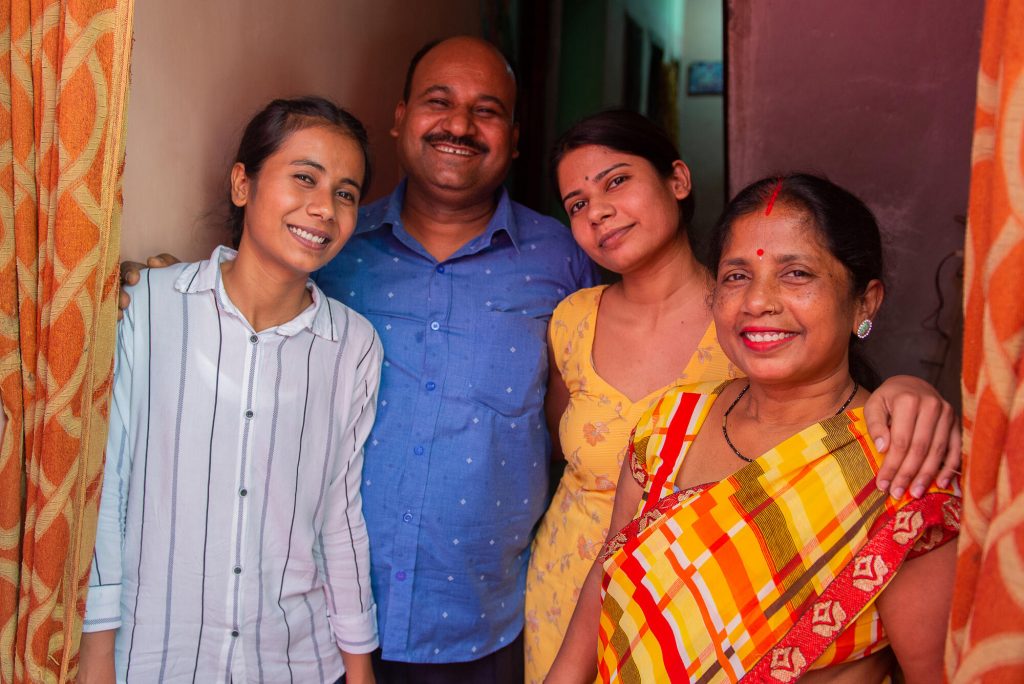 During the same time, World Vision ran a short term special project called “Save the girl child” in 2008.  Several awareness programmes on educating the girl child were organised as part of the campaign and the message to ‘save and educate the girl child’ was included in every training programme conducted. It was through these programmes that Mr. Sudhir changed his mind and decided to educate his daughters.

With a meagre pay of INR 300-500 per day as a daily wage labourer (salesman), Sudhir had to face several challenges to educate his daughters. “I’m educating all my children with much difficulty. All three of them are girls but they are not less than boys. We educated our eldest daughter with much difficulty, then we educated the second one and now our youngest daughter is also studying,” he says with grit and determination.

Not just Sudhir, but Sanjudevi also had a transformation through the programmes conducted by World Vision and she stood by her husband to educate their daughters. She says, “When we got out (of the old mindset), we decided that even if we aren’t well educated, we will educate our daughters. It is very important for them to stand on their feet, so that they aren’t dependent on anyone. They should stand on their own feet and manage themselves.” 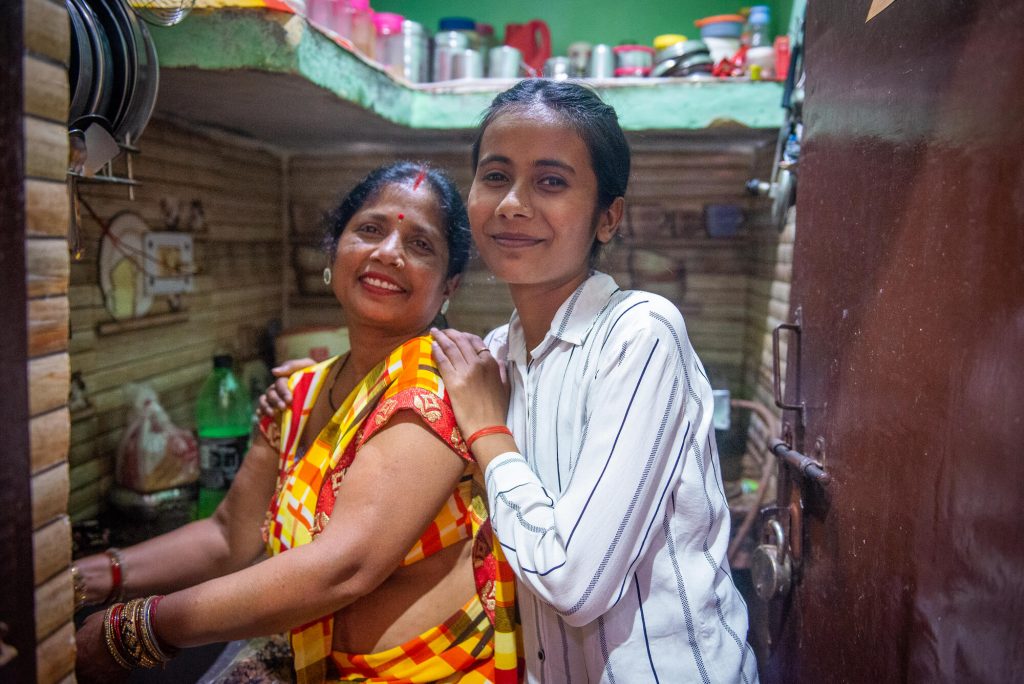 Because of a change in their mindset and attitude towards their daughters, all three of them are well-educated. Khushbu’s eldest sister, Nidhi (24 years old) completed Bachelors in Commerce with honours and did a short term course on computer education. Now she works in a finance company and earns a good salary. Her second sister, Neetu (22 years old) just completed her Masters in Business Administration with Finance and HR and is going through training for a job.  Khushbu herself recently graduated from grade 12 as a top ranker and is now pursuing her Bachelors in Science with honours from at a top government aided institute.

Sanjudevi now says, “I’m proud that my daughters stand strong during every distress. And whenever we face troubles, our daughters support us and no one else stands by us during such times. During Covid-19, it is our daughters who took care of us. My eldest daughter is working and she supported us financially when our situation was quite bad. “

When marrying off their daughters early was what the society was telling them, Khushbu’s parents stood firm. Khushbu says, “Earlier, my parents thought they will educate my sisters a little and get them married off. But they didn’t do that. Through the meetings conducted by World Vision, they decided that they’ll let their daughters get married whenever they want to. They felt that we should achieve our goals first and then do what we need to do.”

They didn’t stop with allowing their daughters to achieve their dreams first, but they took an extra step of not paying dowry (an old illegal system of paying in cash or kind for the girl to be accepted by the boy’s family) for their eldest daughter’s wedding that took place recently.

Sanjudevi proudly says, “Our eldest daughter’s marriage was done according to her wish. When she said she wanted to first work and stand on her feet before getting married. That’s what we did and got her married only then. Going forward, we won’t force our younger daughters to get married until they are ready for it.”

Khushbu wants to become a researcher and believes she can make a tangible difference in people’s lives through science. She also believes that without sponsorship, she wouldn’t have received the help needed to study further.  She says, “If World Vision was not part of my life, I wouldn’t have seen or learnt the amount of things that I’ve learnt thus far. World Vision organised a lot of LSTD and LSET trainings, and I participated in them. I had never experienced the development that I’ve experienced after participating in these programs.”

World Vision also supported Nidhi and Neetu financially to pursue higher education, whilst providing them the required moral support required to move ahead in life.

Khushbu’s mother concludes, “If your daughter wants to study, then educate her and help her stand on her own feet.” Sometimes, addressing the root issue of child marriage, which is a mindset issue based on gender discrimination and societal myths, is the right way to save a girl child from violence and abuse.