“I want to give back to the families in these villages and do good things for them the way World Vision did for me and brought me to where I am today,” says 28-year-old Neeraj, dressed in a fashionable formal pant, a half-sleeved shirt, and a cotton sleeveless jacket—the attire of a modern-day politician in India. With a quavering voice, he adds, “I became a politician only because I believe that such a person has the power and influence to help people in every way.” 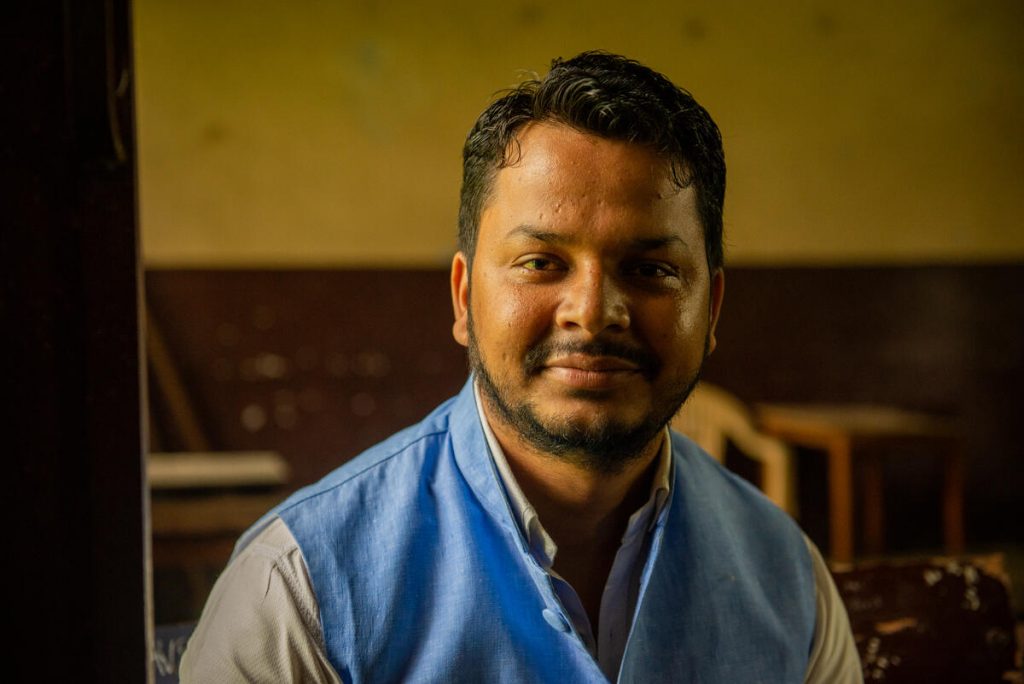 In the middle of tall and green sugarcane fields are well-constructed cement roads that lead into one of the many villages that Neeraj looks after as a Pradhan (village lead) in Uttarakhand. As he walks through the village, voices of children calling out his name are heard from afar. Old men and women are beginning to crowd the streets. In a flash, all young and old surround Neeraj and try to talk to him. While some of them are eager to greet him, others want to share their problems. He is their village lead, yet they seem to be fond of him for his friendly and loving nature.

When he became the village lead a year ago, Neeraj placed CCTV cameras (closed circuit television cameras) in the villages to make girls and women feel safe. He initiated trainings on organic farming to help poor farmers cultivate better and has been actively helping youth find jobs or providing them with entrepreneurial loans. Neeraj ensures that none of the villages under his care face a shortage of water and electricity.

“Twenty-three years out of 28 years of my life have been a journey with World Vision. I can say this from the depth of my heart and with sincerity that if World Vision didn’t come into my life, I wouldn’t be where I am today,” Neeraj shares. 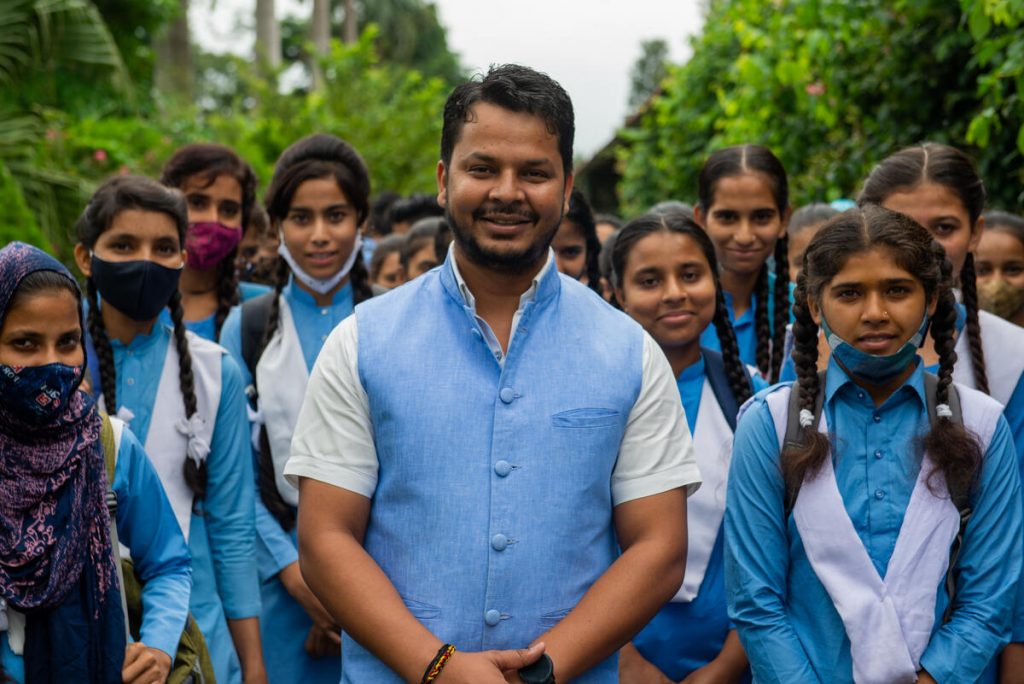 When Neeraj was only 5 years old, World Vision came to his village and sponsored him among 60 to 70 other children. There were no toilets, the girl child was especially discriminated and abused, all children were made to work and not sent to school. World Vision soon began Children’s Groups where children, both boys and girls, were taught about their rights.

“In 2001, a child parliament was formed from the children’s groups. This was the best part of the journey. I developed an interest in social activities from my childhood because of this child parliament. I was part of various ministries and we were also taken to Delhi, Chennai, and other places to meet politicians,” says Neeraj.

He recollects how he never took part in any cultural programme in school because he wasn’t confident enough. But over the years, Neeraj’s confidence to speak in front of people grew tremendously. He also began feeling concerned about social issues in and around his village. In 2011, he contested the student union elections in college and won the elections.

Neeraj began working with political parties and learnt from the leaders of his state during that time. Now he is a Pradhan of a cluster of a few villages. He is also contesting for a seat in the upcoming state assembly elections to be a Member of Legislative Assembly and a cabinet minister of Uttarakhand. He sees himself as the Chief Minister of Uttarakhand in 10 to 15 years from now.

“You cannot imagine a child from a poor family, who didn’t even study in a proper school, to be able to handle social issues and make a difference socially. The work World Vision did in my life has made me this leader today,” says Neeraj.

Neeraj’s father, Hukam Singh, 58, is a farmer and his mother, Kanti Devi, 52, is a homemaker. Before Neeraj became a politician, the family lived in a house built with tin sheets and hay. Hukam Singh used to have a small field and cultivate it to provide Neeraj and his three siblings with INR 3500 (US$46) per month. He had to look after the entire family with that money, which would not be sufficient to even feed the children on some days. “When it rained, water would drip into our home through the ceiling. We struggled a lot because we were very poor. But World Vision supported my son’s education even up to college,” says Hukam Singh.

Kanti Devi is thrilled about the changes her son has brought in their lives. “Earlier, we used to struggle for our own food. Now we provide food to those in need. I’m so proud of my son, especially because of his heart to help others and World Vision is instrumental in bringing this change in his life as well as our lives,” she says, smiling.

Today, besides helping thousands of people in his hometown, Neeraj is also a proud World Vision sponsor of a little girl from an urban slum in Delhi.  He has placed her picture on his office desk to show everyone his own sponsored child, whose life he believes will be transformed through sponsorship. He loves her. 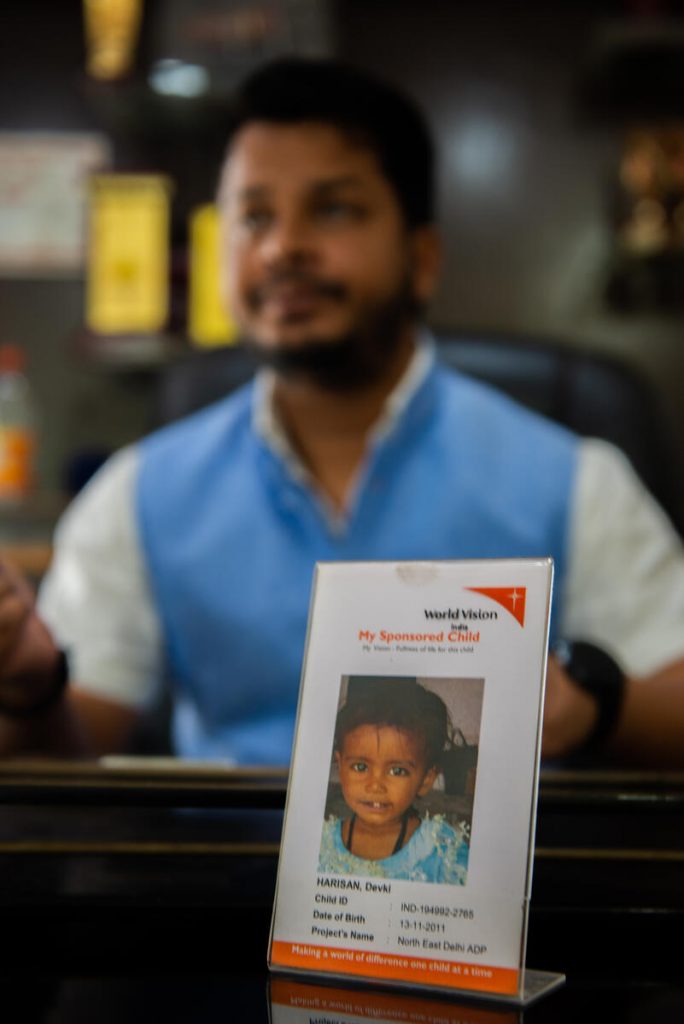 Babli, Rekha, Vishal, and Sandeep were also part of the children’s group that Neeraj was part of 15 to 20 years ago. The only difference is that Neeraj was sponsored and these children were not. Yet, just like how water poured on one plant waters other plants around it, Neeraj’s sponsorship greatly impacted the lives of these four non-sponsored children. All the children were part of the child parliament, where they were encouraged to talk about various social issues in their communities and become ministers who bring solutions.

Today, Babli is a teacher, Rekha a tailor, Vishal is employed as a lab technician in a pharmaceutical company, and Sandeep is a banker. All these children, who in some way or the other were impacted by World Vision’s work in their community and lives, want to give back to society because of the values instilled in them through the child parliament and other programmes. 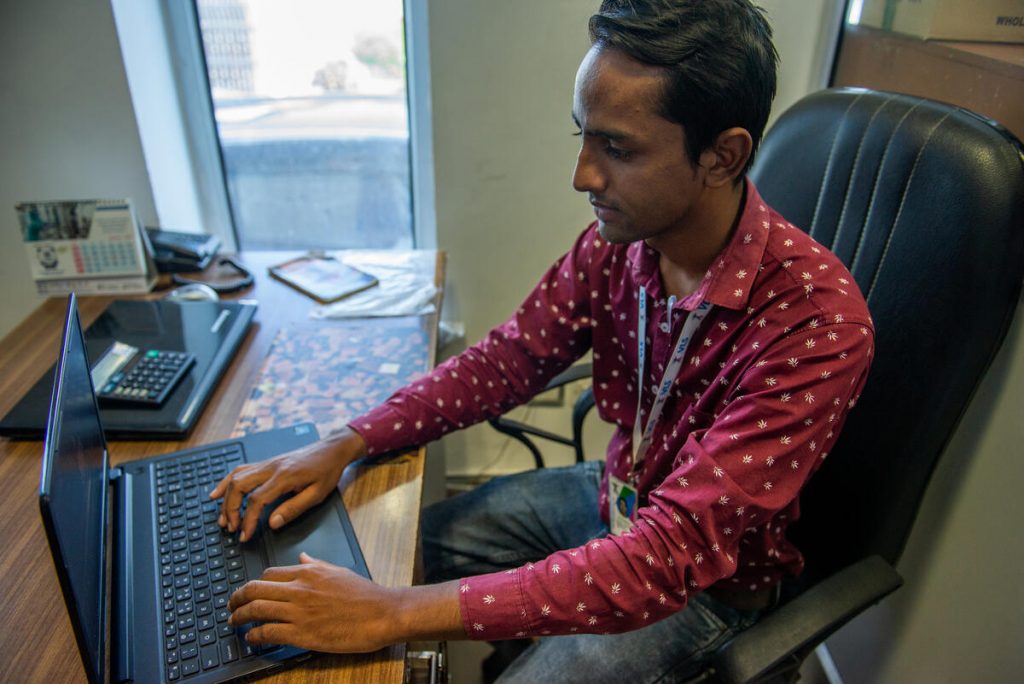 “Today, I’m employed in such a good company with a steady income because of being a part of every programme that World Vision conducted in our community when I was a child,” says Vishal, 26. “We were so poor that we didn’t have a proper house to stay, leave alone go to school. If I was supported to complete my education, I want to help other children like me. I’m already supporting a child from my community for his education.” 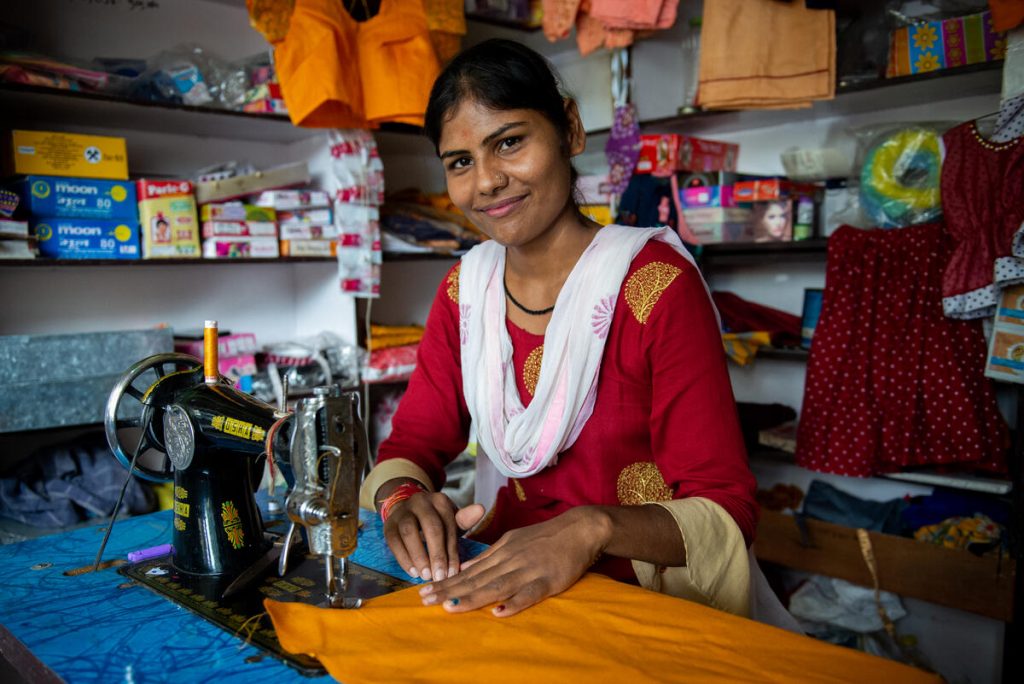 With tears in her eyes, Rekha, 25, recollects how World Vision came to support her and the family when she lost her father. World Vision gave her a tailoring machine and that changed everything in her life. “I tell everyone in my community that I will teach them tailoring for free. I’m already training 4 to 5 girls. I know the struggles we faced and how much this machine has helped me. I want others also to have some skills to have a peaceful and better life,” says Rekha. 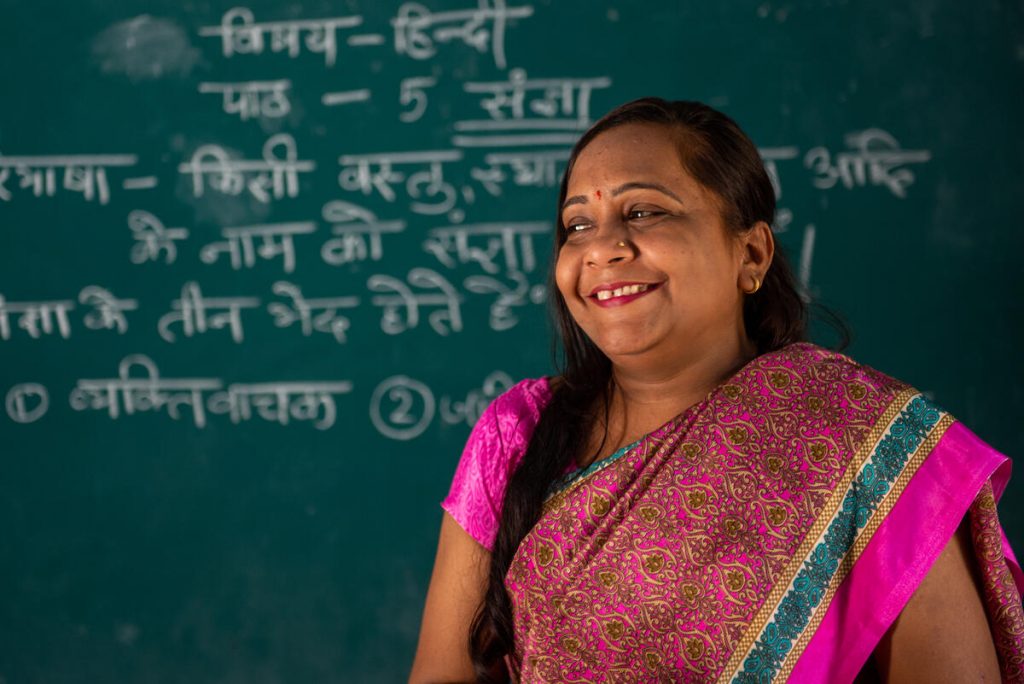 Thirty-two-year-old Babli, a teacher and aspiring professor, says, “I don’t want other girls to suffer and feel helpless without having a chance to be educated, that’s why I teach girls in my community basic subjects for free. Education is extremely crucial for a family to move forward in life.”

Babli knows what it feels like to suffer. “When I was in class eight,” she says, “I wanted to continue my education but my parents said they don’t have money so they can’t send me to school. I was extremely depressed during that time. That’s when I heard about the children’s group conducted by World Vision India.” It was in the children’s group that Babli’s perspective changed. “Once I started coming there, I learnt that education is my right and I began to persuade my parents to send me to school once again. World Vision also supported me in paying my fees for school and college.”

In this community, children as young as 5 used to be sent for work. After World Vision entered the community, families were taught that children have to be educated and not employed. Parents gradually began paying heed to World Vision’s words and began sending their children to school. The children who couldn’t afford going to school were being sponsored by World Vision India. Today, the awareness in the village against child labour and importance on education has spread far and wide. No one sends children below 18 years for work anymore. 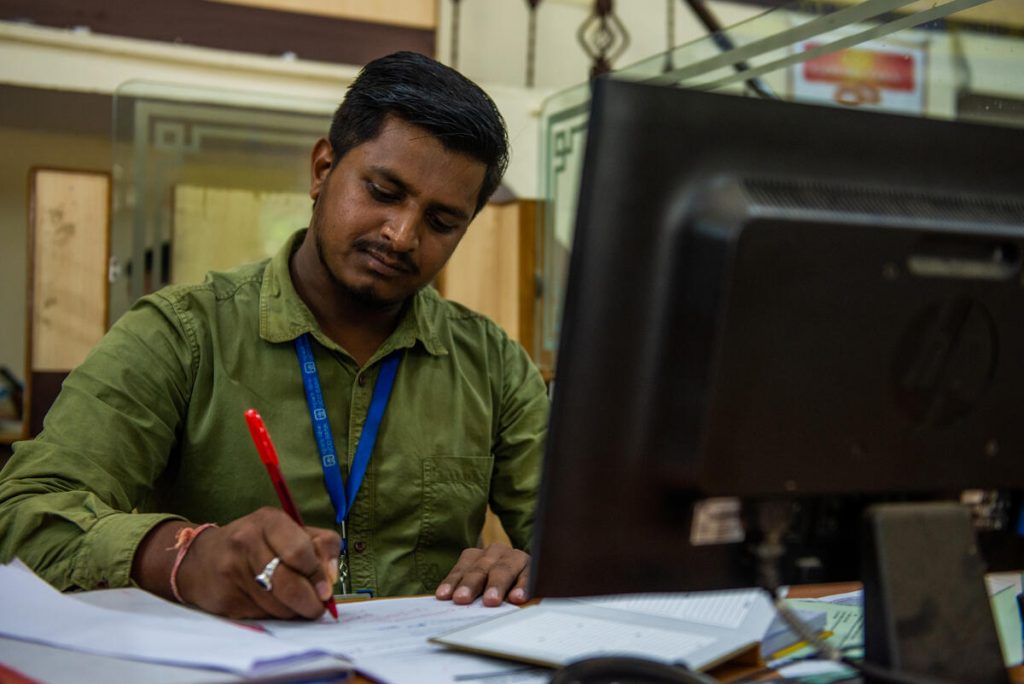 Sandeep, 30, dressed in a formal shirt and pant, is sitting in his cubicle at a national bank and working. “If not for World Vision,” he says, “I may not be here sitting in this bank as a banker. They encouraged me, supported me and provided all the guidance I required to be successful in life. Now, I sponsor two children to help them complete their education. It was only the day I began sponsoring them, I felt satisfied with my life.”

With tears in his eyes, Neeraj says, “What I’ve learnt from World Vision, I’m making it reach the poorest of poor. It has always been my desire and efforts to be of help to the person who really needs me. You won’t believe that there are so many youth and elderly who look up to me and hope that they would receive whatever they’ve dreamt of through my help.”

When Neeraj was sponsored by World Vision, four others—Babli, Rekha, Vishal, and Sandeep benefitted. This is a beautiful tapestry of transformation and love woven together through sponsorship.