“If this corona was not there, then our father would be here with us right now”, says 14-year-old Sufian* with a soft and broken voice. 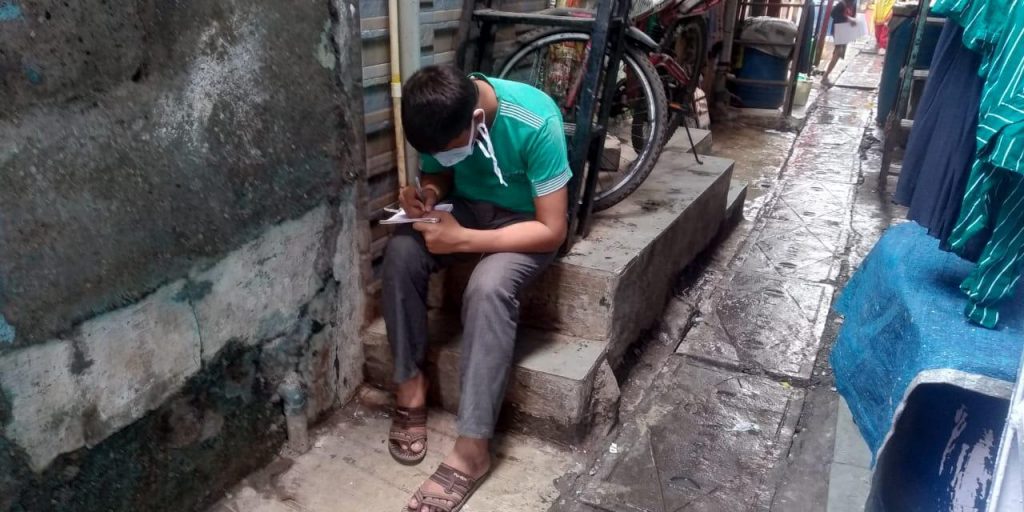 Sufian lives in a small rented house in the community of Dharavi in Mumbai with his mother Nilofer* and brother Sohail*. His father Suleiman* made a living as a tailor in a local factory, but after the lockdown in March 2020, his work came to a standstill. The family had to make do with their savings for a while; however, Suleiman’s medical needs were a source of constant worry.

From seeking dialysis to being COVID positive as a dialysis patient, Suleiman had to undergo treatment thrice a week at his regular centre. The combination of the lockdown and the ensuing financial crunch, forced him to skip two weeks of dialysis, which unfortunately landed him in hospital, where his wife Nilofer suspects he contracted COVID-19.

She tells us tearfully, “It is hard to recollect that time. The lockdown brought too many problems upon our family. Because his work stopped, we had no money to go to a private hospital. All private hospitals or centres expected us to pay upfront and it was very expensive. Even the Government hospitals (that provide free treatment for dialysis), were not entertaining our requests at that time as they had many Corona cases,’’ says 38-year-old Nilofer.

To help the family during this time, World Vision India supported them with a bank transfer of Rs. 5000, to cover any costs that would arise when Suleiman was in hospital. However, the money proved useful in the following weeks as Nilofer had to spend most of it on transportation, medication and other expenses, when Suleiman returned from hospital.

At the quarantine centre

At the centre, Nilofer and her children quarantined with several other people from their community. They too had to undergo the mandatory COVID test, which turned out to be positive. However, Nilofer was not convinced because none of them had any symptoms, and she did not receive a copy of those reports.

She says, “We were kept in a big room that was locked from the outside, and opened only to allow the person who brought our meals. The first four to five days were fine, but after five days, we faced a few difficulties in getting water and even food was not available on time. However, most other facilities were good,’’ says Nilofer.

While she was able to stay with her children during that time, she worried about her husband being alone at hospital. They would keep in touch via phone, but she longed to see him again. After 14 days, and a second COVID test being negative, her family could finally go back home.

In the initial days of the pandemic, the place where they lived (Dharavi- believed to be Asia’s largest slum) became a hotspot for the coronavirus. As a preventive measure, the civic authorities used aggressive measures like containment, testing, tracing, and isolating contacts and suspect cases, among others to curtail the spread of the virus in this densely populated location. Unfortunately, this made room for misinformation, rumours, and fear that spread in the community, the moment someone tested positive.

So once they got back home, there were moments when she felt some community members behaved unreasonably; however, her immediate neighbours were supportive. She tells us, ‘’People in the neighbouring lanes would tell others not to go past our lane, and they tried to keep their distance. They felt that since we had COVID, all of them would also get COVID and that they too would be sent into quarantine…,’’ says Nilofer angrily.

Finally home, but not for long

After spending two to three weeks in the hospital, Suleiman was discharged after his report for COVID was negative. The family was happy to re-unite after a month long separation. Sadly though their time together was short lived as Nilofer’s ordeal to find a dialysis centre resumed, with even more challenges.

The problem that plagued them now was in finding a centre that accepted patients who had recovered from COVID-19. No one was willing to take the onus of treating him. Nilofer’s frantic calls to the special ‘Corona helpline’ did not yield any results either.

On the seventh day

While COVID could have made him more susceptible to infection, it is unfortunate that Suleiman’s family had to run from pillar to post for such a basic treatment. Seven days later, Suleiman passed away, not due to COVID, but because he did not get dialysis in time.

Nilofer was in a state of shock, but had no time to process what had just happened. She continues, ‘’Immediately after he died, the staff in the hospital wanted to declare his death as due to COVID. I insisted though that all his reports were negative for COVID and showed them his file. Only after that, they gave us a medical certificate saying otherwise,” says Nilofer ruefully.

However, getting the paperwork and necessary clearances for the graveyard was another feat. A simple procedure that would take an hour, took more than four hours. ‘’I had to run from one police station to the other to get all the documents in place. It was such a harrowing time,’’ she says.

Despite all these challenges, Nilofer believes that Allah’s mercy was upon them because they could have a simple funeral for her husband. She says, “I am grateful that at least our family and friends could pay their last respects at our house. They could see his face one last time, before he was buried. If he had died of COVID, this would not have been possible,’’ says Nilofer tearfully.

The most frustrating part about this pandemic is that one had to experience multiple losses at the same time. Whether it was the loss of a loved one, loss of a job, reduced pay, lack of access to services, or the loss of human connection because of all the social distancing norms. When all these things happen concurrently, it can complicate or prolong grief and delays a person’s ability to adapt, heal and recover.

While Nilofer has her extended family in Mumbai to support her through this period, there are times when she feels alone and completely overwhelmed with grief. She tells us, ‘’Corona has come into our life and just destroyed it… It does get tough, because I have to put on a brave face for my kids. If I cry then, they too will cry. I do not like to remind them about his death. My oldest son is understanding and has been able to cope, but Sufian misses him a lot. He constantly says that if this Corona was not there, then his father would be with us right now. It is sad, but true,’’ says Nilofer despondently. Since Sufian is still very young, he finds it difficult to articulate how he feels about the events that transpired during the lockdown that led to his father’s death. He tells us though, ‘’My father was very protective and never shouted at me. I miss his love…I miss that the most. The way he loved my mother and us.’’ Looking at how much his father struggled to get basic care he says, ‘’I pray that whoever is sick, gets better soon, and that they get medicines and can go to a doctor,” says Sufian earnestly.

Shift from a homemaker to the breadwinner

Suleiman’s premature death meant that Nilofer had to take on the role of the primary breadwinner whilst also running the household. From never having worked outside the house, to now going to work eight hours a day, Nilofer tries her best to balance both worlds. She feels the absence and support of her companion, but pushes through for her children. 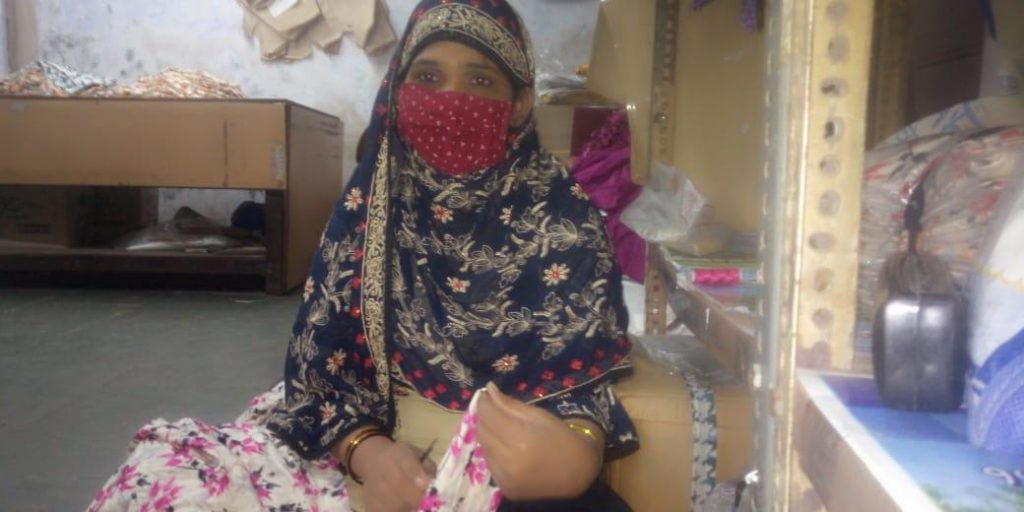 To avoid getting into a cycle of debt, Nilofer got a job as a thread cutter in a factory where she works on readymade clothes to give them a finished look. Through this, she earns approximately Rs.5500 to Rs.6000 ($81) per month. Sadly, a majority of this amount goes in paying rent (Rs. 3800) and other utility bills. Looking at their growing financial burden, her older son Sohail decided to take up a part-time job to contribute to the family income. He understood that Nilofer too was working for the first time and thus felt duty bound to support his family in whatever way he could.

Nilofer feels bad that Sohail had to assume these additional responsibilities, but she makes sure he does not stop his education. She says, “I want him to study now, because this is the age to study. If he takes a break, he may find it difficult to get back to his studies at a later point,’’ says Nilofer. Hence, after passing his 12th grade examination in June 2020, Sohail enrolled himself in College to pursue a degree in Commerce.

However, all these changes on the home front has perturbed her youngest son Sufian, who is upset that his mother has to work so hard. He says, “I do not like the fact that my mother has to go to work now. I miss her presence at home and we hardly get to spend a lot of time together now. I do feel proud of her though, because she manages the home, goes to work outside, and takes care of us. She does so much for us,” says a grateful Sufian.

For some getting back to a normal routine helps in dealing with the grief of losing a loved one. This was the case with Nilofer and her boys as they were relieved when the restrictions lifted and they could resume work and other regular activities. 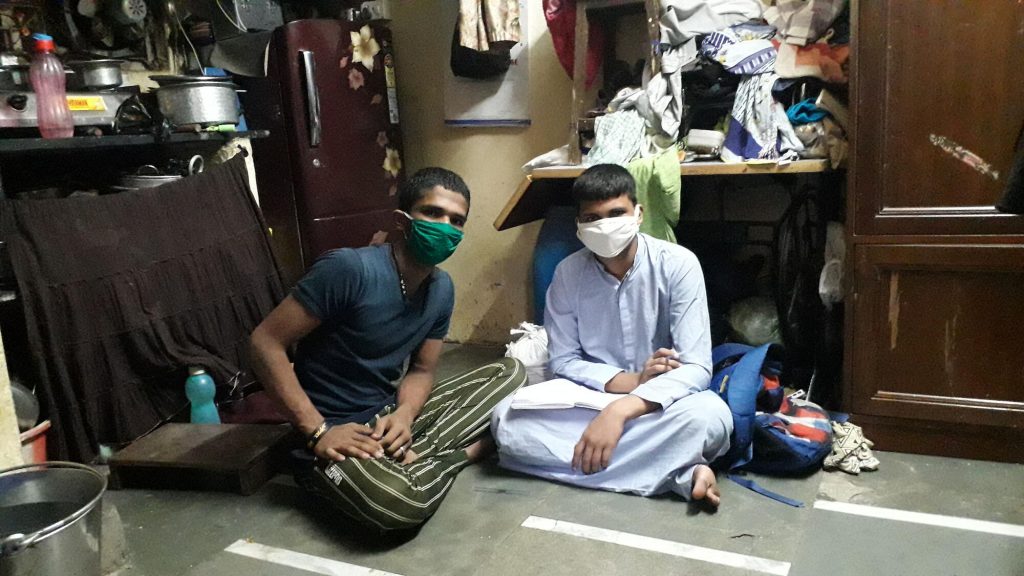 Even though schools are yet to re-open in Mumbai, Sufian was happy to attend the online lectures in the morning. These classes started in August 2020, because unlike private schools, Government schools took longer to make the shift to online education. Once they started though, Sufian felt like he was lagging behind as he found it difficult to adapt to the new format. With his mother at work throughout the day, and his brother either going to work or doing his own studies, Sufian needed the extra help.

Looking at his need, World Vision India supported Sufian’s fees for his 9th grade coaching classes, as his mother would not be able to afford it in their present circumstance. Sufian now goes every evening for two hours to these tuition classes so that he gets the necessary support in his studies.

Nilofer is happy that her children want to study and does whatever she can to support their dreams. While Sufian wants to become an Army officer, Sohail wants to finish college so that he can support the family in a better way.

Nilofer and her sons were active participants in many of World Vision’s programs prior to the pandemic. As part of World Vision’s COVID-19 relief response, her family was provided dry ration support (Rice, Flour, oil, spices) twice during the pandemic, along with educational support and a cash transfer to help them cope during this interlude.

A message of hope

Through the COVID-19 response, World Vision India has been on the ground supporting children like Sufian and his family to overcome the loss they experienced during this very uncertain time. Whether it was cash voucher assistance, emergency medical aid, educational support or economic assistance to re-start a business, countless families have been able to get back on their feet thanks to the generosity of World Vision’s partners, donors and well-wishers.

Nilofer concludes by saying, ‘’These kind people were there for us in our hour of need. I cannot express how grateful I am for the timely support we received during this period. It was a difficult time to help others because of the financial constraints, but they did this for us. So, for those people I just want to say thank you for everything,”