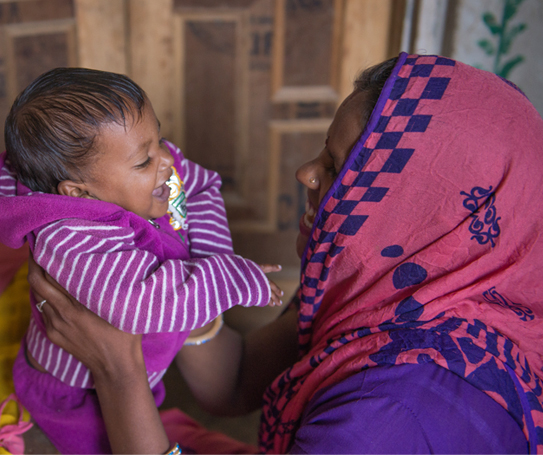 Rajanti lives in the communities we serve in Alwar, Rajasthan. Since she did not have her own milk, buffalo milk was fed to her daughter Yamini since birth. During the National nutrition week celebrated by World Vision India in September 2015 at the community health centre, Rajanti brought a weak Yamini for a free-check up.

Only when she was diagnosed by the health workers in the programme, Rajanti came to know that her daughter was severely malnourished.

“After much counseling and constant follow up, Rajanti was willing to bring her daughter to MTC (Malnutrition Treatment Centre). A lot of parents do not want to bring their children because of the fear of losing out on their daily wages,” says Surja, 30, Accredited Social Health Activist (ASHA) worker. Through regular visits of the ASHA worker, Rajanthi learnt about nutritious feeding enabling Yamini to regain health.

“The MTC has brought her from the dead and I cannot be more thankful to the doctors” says Rajanti.

World Vision India is monitoring and supporting about 46 Anganwadi (basic health care centre for Indian villages to combat child hunger and malnutrition) workers, 37 ASHA workers and 15 health frontline workers at Alwar, Rajasthan. The aim is to bring malnutrition issue on the limelight to the government officials and strengthen front line workers.

UMANG (Urgent management and action for accelerated growth) is a feeding program introduced through self-help groups for all malnourished children, including children below two years so that they reach desired nutritional levels.

World Vision India has developed nine Anganwadi centres from 2013-14 by providing training to the Anganwadi workers, assisting in child friendly furniture, toys and encouraging mothers to send their children to the centre.

“There used to be only two or three children who would come to the Anganwadi but after World Vision India strengthened the centre, about 60-70 children come now. We are well-equipped now to provide awareness about nutrition, good habits, immunization and pre-school learning,” says Suhseela, 50 years old who has been an Anganwadi worker since 1991.

The MTC was also renovated by World Vision. Only about 27 patients were admitted in 2013 but after World Vision India’s renovation of the MTC, 74 children were admitted. Due to this the staff working there were able to save more children from the clutches of death.

232,602 children under the age of five were covered in 2014 by World Vision India health programs which are UMANG (Urgent management and action for Accelerated Growth) covers around 63,996 children.
Malnutrition’s seriousness is still largely invisible to families and communities that experience them in India and adequate nutrition is not seen as a human right. The malnourished have little voice in determining the direction of policies of the government. This is one of World Vision’s primary concerns and we are addressing it in every way possible. It is our desire to see every child have a healthy childhood.