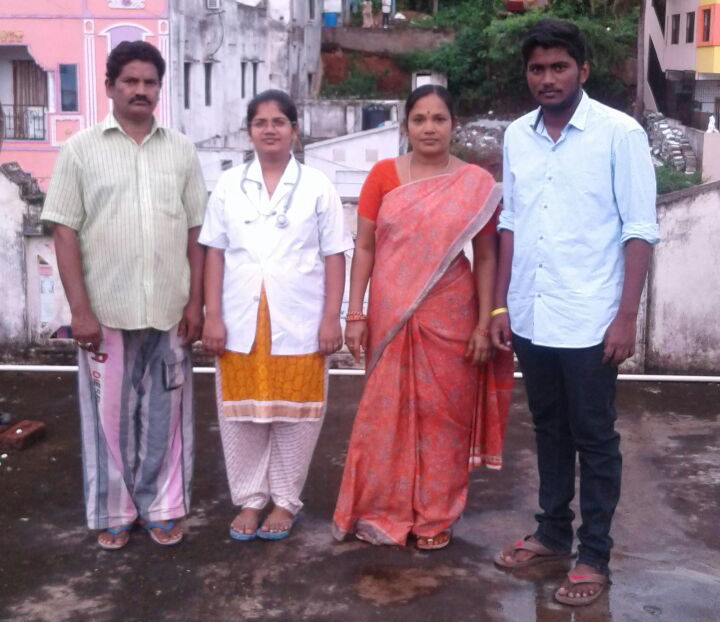 Bhagyasri lived in a thatched house on mountain slopes in a little village in Visakhapatnam, Andhra Pradesh. The mud steps that led to her house became slippery during the rainy season, making it difficult for people to commute. Going down each time to the market to buy groceries or other essentials seemed an impossible task.

During the rainy seasons, it became very difficult to even go and fetch water. Children skipped schools as the path became risky and dangerous. In addition, lack of drainage system added to the misery.

Bhagyasri’s father, Appala Raju, is a daily-wage labourer in a steel plant. He earns Rs. 1300 a month. Her mother, Satyavathi, stiches clothes. Bhagyasri’s brother, Prudvi, is studying in the 12th standard. Due to her parents’ meagre income, her education was supported by her grandfather.

After World Vision India stepped into her community, things have changed for the better. The community people were encouraged to form a committee for their own development. This resulted in several benefits like construction of cemented steps, access to proper water facility and good drainage system. As a result, children now go to school regularly, even during the rainy seasons.

The community people no more live in thatched houses, rather they are happy to live in properly constructed houses.

Bhagyasri was sponsored and supported by World Vision India to complete her education till the 12th standard. Her ambition is to become a doctor.

However, Bhagyasri was forced to discontinue her education as her father could not afford her higher education. Her mother too had to stop her work as a tailor as she suffers from heart ailment.

Fortunately, a coaching centre came forward to give her free coaching in EMCET. She worked hard and scored 2800th rank in EMCET and now she is doing 2nd year MBBS in Visakhapatnam.

Listen to what Bhagyasri has to say:

34 thoughts on “A Doctor in the Making”