It doesn’t take much rain to deluge the road in Delhi. The road leading to one of our communities in Delhi’s slums is waterlogged after a short shower.  Mercy and a couple of volunteers take a tuk-tuk to cross the flooded road to the other side. The water is now knee-high, and children play recklessly in it. The locality is not easy to reach on a normal day. The small road is often jammed in peak hours, but that is nothing compared to the mess on a rainy day.

In a river of people moving through the street, Mercy stands out in her World Vision (WV) India’s jacket, but the locals know her well and consider her one of them. She often visits the community to talk about the challenges and wellbeing of the community with the parents, children, and local government authorities. 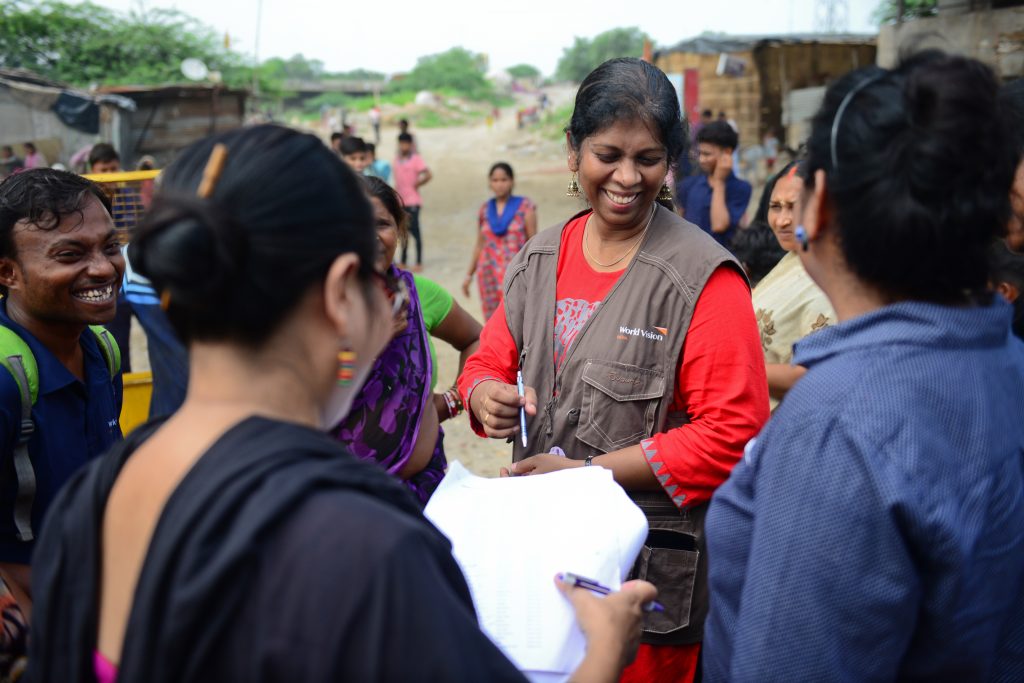 For someone who is not a trained social worker, Mercy has worked as a humanitarian worker for more than 20 years, and she loved every moment of it. Her eyes glitter as she begins talking about the experiences and transformation she had seen in the communities. “I realise it’s all about your relationship with people. I never look at it as work. For me, it’s not like a job that I’m doing, where I’m supposed to do this but something that I enjoy,” says Mercy.

She joined World Vision India in 2001 as a Secretary to an Associate Director. She had no experience as a social worker. In 2004 she was moved into a project in Delhi. Since then, she has been a field staff, directly engaging with the communities. Being able to engage with the people in the community has been one of the most satisfying parts of her work. “In the community, I love the response, the love of the people,” says Mercy.

“It’s been an amazing journey. I had a lot of satisfaction in what I’m doing. After working for 20 years, I realised that this is where I want to be, and continue to be,” said Mercy. Her best memories of work are of time spent in the communities.

Though Mercy was a novice at her job, World Vision India has equipped her through various learning platforms and exposures. The experience of working with various people in the community has given her the confidence to work in any setting. She is also a member of World Vision India’s National Disaster Management Team (NDMT) and has been trained for emergency response. Though she hasn’t been deployed, the training and learning have taught her about programming during emergencies. She has also been trained in Channels of Hope, Which is a way of mobilising and responding to core issues in the communities through faith leaders. She trained faith leaders on issues of child protection, because people tend to listen to their faith leaders.

The story of transformation has been the hallmark of her work over the years. In 2013 self-defense, WV India began giving self-defense lessons to 60 students. As of today, around 3000 young girls have been trained in Delhi. Later women were also taught self-defense through the Delhi police. “They were shy and didn’t want to do these techniques in public. But slowly, they picked up. In one training, we had the mother-in-law, the daughter-in-law, and her daughter. We had three generations attending the training,” says mercy smiling. Such unconventional stories of behavioural change and breakthroughs are rather common in her line of work, and she loves it.

Mercy is a wife and a mother of two boys. Her family has always been supportive of her work. They understand the demands and nature of her work and gave her the space and the support. “There was a time when we used to travel a lot. There are days you are working late, working on a Saturday or a Sunday. They perfectly understand it,” says Mercy. Her family also cheers and celebrates many of the success stories in the community. One of the youths in the community, who is now a bank manager, visited their home, and they celebrated his success. The community has become a part of their lives.

Initially, Mercy was a little apprehensive about the idea of being in the field during the pandemic. Delhi registered one of the highest numbers of Covid-19 cases in India. WV India responded and distributed rations and sanitary items. So many people lost their livelihood and struggled to get food on the table. 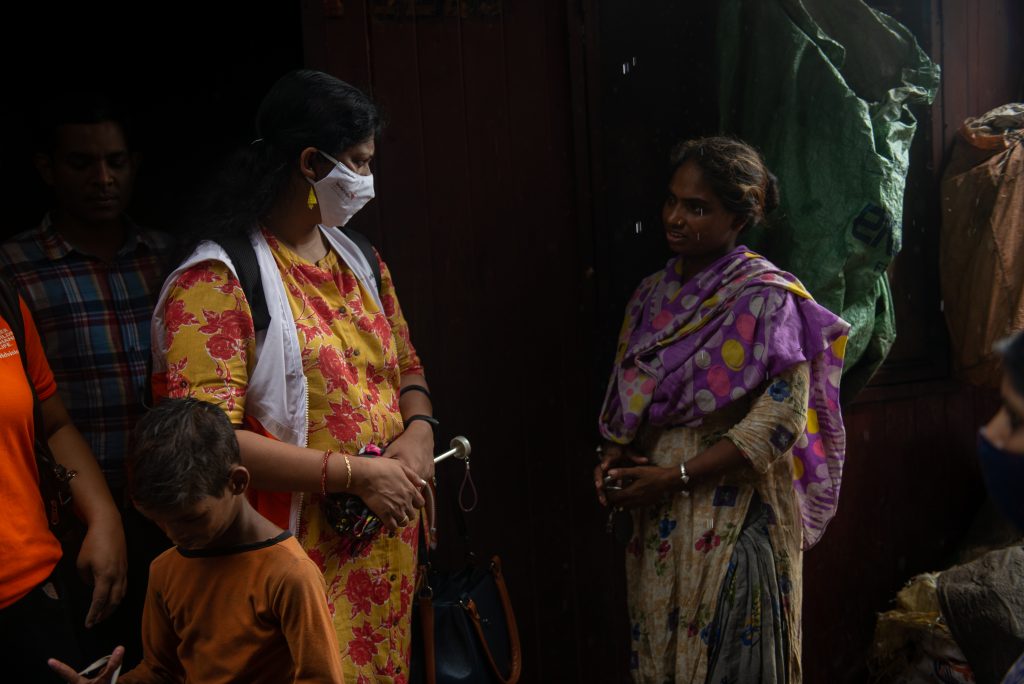 “In May, I realised that if everybody stays home, no one will reach out to the people in need. Being a humanitarian worker, it’s not fair being for me to stay home and not be there for them. So I decided to visit the field in May. Even then, my family was very supportive.”

During the lockdown, many people live on cooked food distributed by the government and other civil bodies. She recalls the joy of a beneficiary at receiving dry rations. “They had been living on cooked food distributed for more than a year. Very basic food consisting of rootis so when he was very happy to receive the rations. He had a smile on his face. He was elated that they were going to cook food for the first time in a long while,” says Mercy.

After making rounds visiting families, Mercy moves to the centre, where a group of young girls has assembled. After having worked in the community for almost a decade, the community had its first matriculate in 2018, a boy named Amar. Children attending school was a far-fetched dream just a few years back. Today, many children, including girls are in school. Mercy and other WV India’s staff have encouraged and helped children enroll in schools. The centre also acts as a safe space and the only place of learning for many.

“I have known Mercy mam for eight years. She wants me to achieve something in life and become a nurse or an engineer. We have a big centre in the community, and Mercy mam often spends time with us at the centre and home. She loves us so much, and we love her too. She will be with us until we can look after ourselves,” says Barkha, 11, one of the children from Delhi’s Restoration of Street and Working Children Project. Like many children in the community, Barkha works as a rag picker in the morning and attends school during the day. She is in the 7th standard and dreams of becoming an independent girl capable of caring for her family. 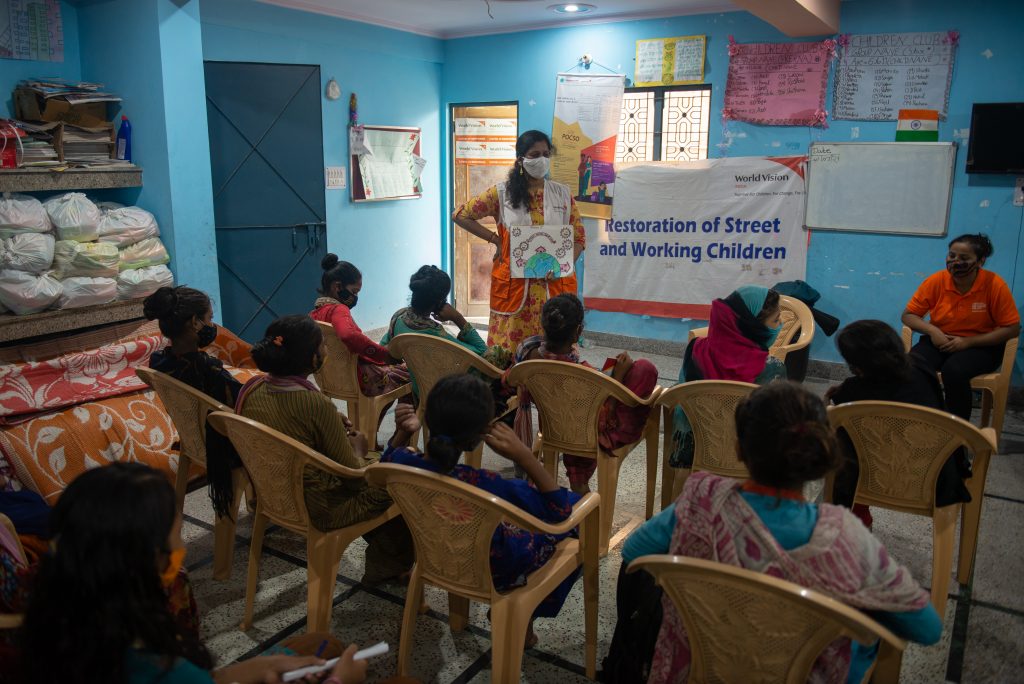 There are a dozen of girls just like Barkha, whose dreams have been ignited. They can dare to dream of a better life despite all the hardships they faced. Mercy encourages them to continue dreaming and stay in school. “It’s very hard for them to stay in school because they are the bread earners in their families and cannot stop working. They live in a one-room house along with 9-10 people, and it’s difficult to study in that environment. We have around five girls enrolled in the10th standard, and we will be seeing the first girl matriculate from the community soon,” says Mercy.

Asked about the most satisfying thing about her work, she says there are too many to name. She recently visited a community where she used to work and was floored by how fondly they still remember her. “Just last year before the lockdown, I visited this project after a gap of ten years. People still recognise you and still talk about the impact WV India has made in their lives. You feel it is worth all your efforts. You can see the transformation. People are still connected with us. I still get calls from community members inviting me to come to their daughter’s wedding,”

Transformation takes time, and in most cases, the process is slow. Sometimes the results are more immediate, but Mercy is just happy to see the positive changes in her community.

“A few months back, we were able to give hearing aid to eight children who had a hearing issue. When they were finally able to hear it, there was nothing like it. You feel you have made a difference in their lives. The fact that you can see them grow, change, transform is more than enough. That is all you want to see at the end of the day,” says Mercy.

3 thoughts on “A Difference Maker”